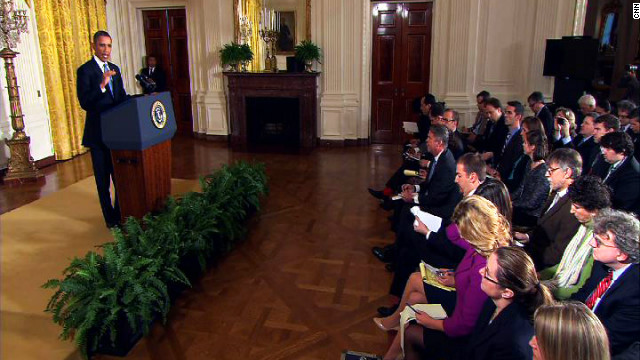 [Posted at 12:09 p.m. ET] Risking the nation's credit standing by using the debt ceiling debate to force spending cuts would endanger economic recovery and goes against the nation's founding principles and the will of the people, President Barack Obama said Monday at a news conference.

"What I will not do is to have that negotiation with a gun at the head of the American people," he said.

Obama added that demands by congressional Republicans that a debt ceiling increase must be accompanied by dollar-for-dollar spending cuts is an expectation that is "impossible to meet without doing severe damage to the economy."

You can follow the rest of the news conference live or by reading our Political Ticker live blog.

[Posted at 11:54 a.m. ET] The president said he continues to support an assault weapons ban, stronger background checks on gun purchasers and a ban on high-capacity magazines.

[Posted at 11:48 a.m. ET] President Obama is talking about the economy and gun violence.

The nation is "poised for a good year - if we make smart decisions and sound investments and as long as Washington politics don't get in the way of America's progress," President Barack Obama said in a news conference Monday summing up his first four years in office.

"America cannot afford another debate with this Congress about whether they should pay bills they have already racked up."

[Posted at 9:23 a.m. ET] The White House just updated President Obama’s schedule for today with news that he will hold a news conference in the East Room at 11:15 a.m. ET.

You'll be able to watch on CNN and CNN.com as well as CNN's Mobile apps.