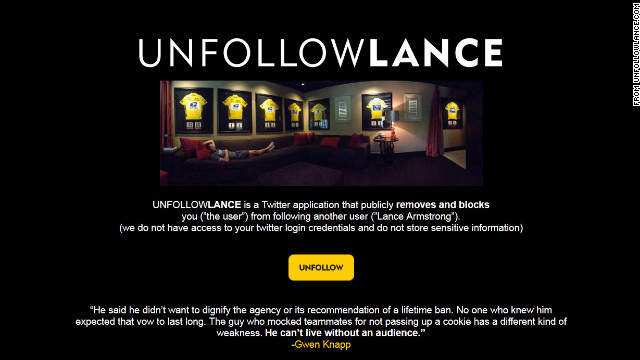 "Unfollow Lance" will allow users to share their frustration with Lance Armstrong by publicly unfollowing him on Twitter.
January 16th, 2013
09:51 AM ET

The Buzz: Your morning cup of social

Each day we're going to try to highlight the conversations bubbling across your social circles. As we find stories that are trending, issues that are being hotly debated, and interesting tidbits that are spreading like wildfires on Twitter, Facebook, Reddit or other social media, we want to tell you about them.

So, what will your co-workers be talking about this morning? Here's a roundup of some of this morning's big social conversations.

A California congresswoman has proposed a bill aimed at preventing overzealous prosecution of certain computer crimes following the suicide of Internet innovator Aaron Swartz. "Aaronâ€™s Law" would amend the Computer Fraud and Abuse Act to limit prosecutorial power against citizens who release information from certain databases. Rep. Zoe LofgrenÂ  went on the social platform Reddit to announce her bill. Draft text can be found here.Â

The Center for Science in the Public Interest has released its annual list of the "worst" foods you can eat, called the Xtreme Eating Awards. A quick comparison: A person would be better off eating a bucket of KFC Original Recipe chicken than the Crispy Chicken Costoletta from the Cheesecake Factory. Check out this CNN Health story for the complete rundown.

ESPN announcer Stuart Scott has been very public about his battle with cancer, and in a Tuesday USA Today article, also public in his gratitude for Lance Armstrong's anti-cancer efforts.

"I donâ€™t care about a bike race. Iâ€™m fighting cancer and trying to stay alive for my daughters. ... Armstrongâ€™s efforts that affected millions of people with cancer is his legacy. And youâ€™re not going to argue me off that.â€ť

He may support Armstrong, but a Twitter app called "Unfollow Lance" is hoping users will go public with their disdain for the former cycling champion. The app posts a status on users' Twitter feeds showing that they have unfollowed and blocked Armstrong.

You can sound off in the comments below on these stories and share with us the most interesting things you've seen this morning that you think might have everyone talking.