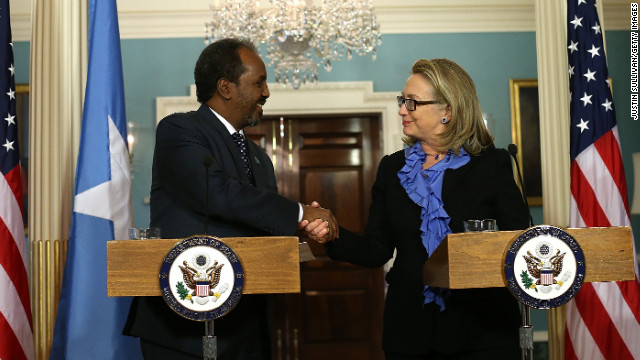 For the first time in more than two decades, the United States has granted official recognition to the Somali government in Mogadishu.

"There is still a long way to go and many challenges to confront, but we have seen a new foundation for that better future being laid," Secretary of State Hillary Clinton said Thursday in a joint news conference with Somali President Hassan Sheikh Mohamud, who stood beaming at her side.

Clinton praised Somalia's actions in reducing the level of extremism since she took office in January 2009, when "(militant Islamist group) Al Shabaab controlled most of Mogadishu and south and central Somalia, and looked like it would gain more territory."

A Covid-19 patient played the violin while on a ventilator in the ICU to thank health care workersâ€twitter.com/i/web/status/1â€¦Yj
cnni

1:46 pm ET November 26, 2020 RETWEET
Abortion is legal in Namibia, but only if a woman is in danger or has been sexually abused. Activists are demandingâ€twitter.com/i/web/status/1â€¦0f
cnni