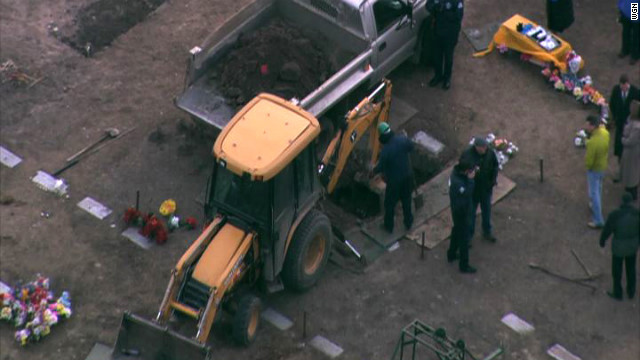 A crew works on exhuming the body of Urooj Khan from a Chicago cemetery Friday morning.
January 18th, 2013
09:15 AM ET

Workers have begun the process of exhuming the body of an Illinois lottery winner who authorities believe was poisoned.

A crew is digging at the north-side Chicago gravesite of Urooj Khan, whose July death at age 46 came one month after he became a $1 million winner on an Illinois lottery scratch ticket.

Investigators initially ruled Khan's manner of death natural, and Khan was buried. But after being prompted by a relative, the medical examiner's office in Cook County, Illinois, did more in-depth toxicology tests on the blood that the office had, and eventually determined there was a lethal amount of cyanide in Khan's system.

Police are now investigating Khan's death as a murder, and they want to use the exhumation to determine how the cyanide entered Khan's system. No arrests have been made in the case.

6:31 am ET January 29, 2022 RETWEET
A nor'easter churning along the East Coast is threatening a dangerous mix of heavy snow and strong winds for millioâ€twitter.com/i/web/status/1â€¦j8
CNNweather

6:22 am ET January 29, 2022 RETWEET
Many people know exercise is important for good physical health, even if they personally don't work out on a regulaâ€twitter.com/i/web/status/1â€¦pA
cnni

5:53 am ET January 29, 2022 RETWEET
Minnie Mouse turned heads when she traded in her signature dress for a pantsuit cnn.it/3g9wKEp https://t.co/mfghkiB61B
cnni