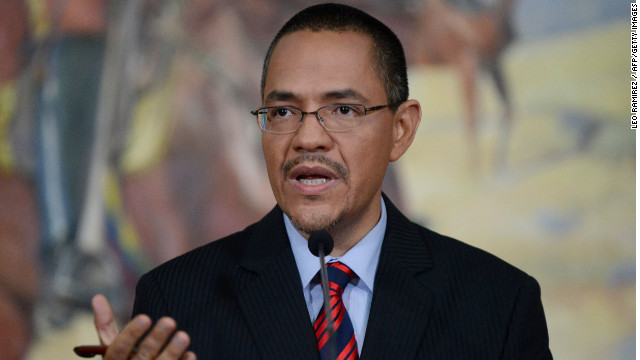 "After learning that the image offered did not correspond to Chavez, El Pais also stopped distributing the print edition and started to send a new edition to retail outlets," the newspaper said in a statement on its website, explaining the retraction and apologizing to readers.

El Pais declined to comment on the matter to CNN. The newspaper's online statement said the photo had been provided by an agency that claimed it was an authentic image of Chavez.

"The daily has opened an investigation to determine the circumstances of what happened and the errors that could have been committed in the verification of the photo," the statement said.

Several purported photos of the Venezuelan leader have circulated on social media in recent weeks, but Venezuela's government hasn't released any new photos of Chavez since he underwent cancer surgery in Cuba more than six weeks ago.

The 58-year-old president hasn't made any public appearances since then, either.

The quick retraction by El Pais did not quell sharp criticism from the Venezuelan government and many on social media, who slammed the newspaper and said the photo was clearly taken from a 2008 YouTube video that had nothing to do with Chavez.

"As grotesque as it is false, the photo of 'Chavez intubated' that today the venerable Spanish newspaper El Pais published on its front page," Venezuelan Information Minister Ernesto Villegas said in a Twitter post.

Later Thursday, Villegas said the Venezuelan government plans to pursue legal action against the newspaper "so that these type of acts do not go unpunished."

"We will use all the legal tools within our reach to proceed to repair the damage caused not only to Comandante Chavez, the president, but also to all of Venezuelan society," he said.

The photo's publication, Villegas said, was evidence of a right-wing media campaign that aims to spread fear and destabilize Venezuela.

Diosdado Cabello, head of Venezuela's National Assembly, said it was no accident.

"Nobody believes that the photo that appears in El Pais of Spain is something accidental," he wrote in a Twitter post, arguing that the motive behind the photo's publication was clear: "hatred."

Pilar Minguez was getting ready to open a bundle of newspapers as she set up her newsstand in Spain's capital early Thursday when she got word of the problem.

"Don't open it. I have to take the newspapers," Minguez said a distributor told her. "There was a problem and they have to change the front page."

Nothing like that has ever happened before, particularly with the prominent El Pais, Minguez said.

"It's unbelievable, because with the number of filters it goes through, it is a little strange, truly," Minguez said.

"I just love them and I want them to know that" A good Samaritan decided to use the $900 he'd been saving to buy gâ€twitter.com/i/web/status/1â€¦Zw
cnni

1:42 pm ET April 3, 2020 RETWEET
Seattle's hospitals are preparing for a surge of coronavirus cases, but there are faint glimmers the situation is iâ€twitter.com/i/web/status/1â€¦5s
cnni