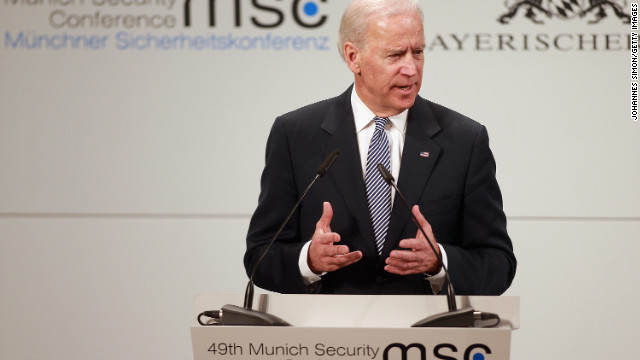 Under the right conditions, the United States is willing to hold talks with the Iranian government, Vice President Joe Biden said Saturday.

The United States "would be prepared to meet bilaterally with the Iranian leadership," he said during a speech at the Munich Security Conference.

The two nations are at odds, primarily over Iran's nuclear program, but there is a standing offer for talks, and "there has to be an agenda that they are prepared to speak to," Biden said. "We are not just prepared to do it for the exercise."

Meanwhile, Iranian Foreign Minister Ali Akbar Salehi said in an interview with Ithe semi-official Fars news agency that he hopes new U.S. Secretary of State John Kerry will contribute to softening Washington's policies towards Iran and that Kerry "would at least rectify part of the U.S. government's anti-Iranian stance and policies."

This fisherman reeled in a gigantic goldfish weighing in at more than 67 pounds https://t.co/mel42HaRpz
cnni

3:30 am ET November 26, 2022 RETWEET
Director James Cameron has revealed that he almost didnâ€™t end up casting Leonardo DiCaprio or Kate Winslet in his btwitter.com/i/web/status/1â€¦njpf
cnni

2:30 am ET November 26, 2022 RETWEET
Rats in northern India have been accused of eating hundreds of kilograms of cannabis seized from drug dealers and sâ€twitter.com/i/web/status/1â€¦V9
cnni

1:30 am ET November 26, 2022 RETWEET
TSA staff at New York's JFK airport found a cat trapped in a suitcase checked for a flight to Florida cnn.it/3F3cWzR
cnni

12:30 am ET November 26, 2022 RETWEET
The designers behind the world's skinniest skyscraper have just given fans of ultra-luxury living an early Christmaâ€twitter.com/i/web/status/1â€¦n7
cnni