A Cuban man who died Monday morning in Miami is the sixth person to pass away since October while in custody of Immâ€twitter.com/i/web/status/1â€¦Ou

A flight chartered by the State Department has left Wuhan, the city at the epicenter of the coronavirus outbreak, tâ€twitter.com/i/web/status/1â€¦ou

Fifty US military personnel have now been diagnosed with concussions and traumatic brain injuries following the Iraâ€twitter.com/i/web/status/1â€¦Pj

The death toll in mainland China from the Wuhan coronavirus has risen to 131 people, authorities sayâ€twitter.com/i/web/status/1â€¦lD

A tsunami threat alert for the Caribbean has been lifted after a magnitude 7.7 earthquake struck off the coast of Jâ€twitter.com/i/web/status/1â€¦10 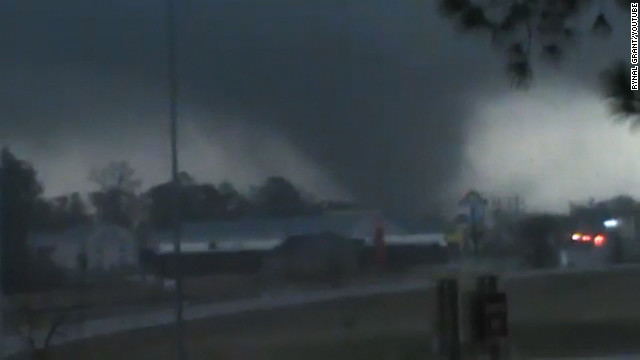 A tornado has caused at least three injuries and damaged structures in Hattiesburg, Mississippi, officials there say.

At 5:28 p.m. CT, Terry Steed from the Emergency Management District in Hattiesburg confirmed that a tornado was on the ground in Hattiesburg and that there was damage. Brett Carr with the Mississippi Emergency
Management Agency in Marion County said at least three people were injured.

At least 10 people died Sunday in a railroad station stampede in northern India as tens of millions flocked to the banks of the Ganges River for a Hindu religious festival, a railway spokesman said.

The crush took place in Allahabad, the site of this year's Kumbh Mela festival, where Hindu pilgrims gather to bathe in the Ganges. Railway spokesman Anil Kumar Saxena blamed overcrowding for the crush, but said details were "sketchy."

There was no immediate comment from police or officials from the Indian state of Uttar Pradesh. But Indian Prime Minister Manmohan Singh said he was "deeply shocked" by the deaths and promised to extend "all possible help" to state authorities.

"I send my heartfelt condolences to the members of the bereaved families and wish those injured a speedy recovery," Singh said in a statement issued by his office.

Kumbh Mela is billed as the world's largest religious gathering and the holiest of Hindu pilgrimages. Devotees believe that washing themselves in the Ganges frees them from past sins.

The family of the late Joe Paterno released a report Sunday morning that absolved the coaching great of blame in the Jerry Sandusky child sex abuse scandal and said a prior review commissioned by Penn State University was "factually wrong, speculative and fundamentally flawed. "

"The experts determined that the conclusions of the (university) report are based on raw speculation and unsupported opinion - not facts and evidence," Thornburgh said, according to the statement.

END_OF_DOCUMENT_TOKEN_TO_BE_REPLACED

LAPD chief: 'I do this not to appease a murderer'

The Los Angeles Police Department will reopen its investigation into the firing of a officer that prompted alleged revenge attacks as the hunt for the man accused of killing three people widened in Southern California's San Bernardino Mountains.

Christopher Jordan Dorner declared war on police in a manifesto after being fired by the LAPD and losing appeals to be reinstated, claiming that racism in the police department was behind him losing his job.

"I feel we need to publicly address Dorner's allegations regarding his termination," LAPD Chief Charlie Beck said in a statement released Saturday.

"...I do this not appease a murderer. I do it to reassure the public that their police department is transparent and fair in all things we do."

Northeast digs out after deadly blizzard; Midwest to get next storm

The mammoth blizzard that buried the Northeast under feet of snow has drifted away, leaving millions on a path of hefty recovery.

At least nine deaths in three states and Canada are blamed on the snowstorm, which was spawned by two converging weather systems.

Residents from Pennsylvania to Maine are trying to dig out from as much as 3 feet of snowfall.

"There's just really no place to put the snow," Bostonian Allison Rice said, trying to shovel away what she could.

A few hours before Kobe Bryant died in a helicopter crash, the NBA legend went to church and prayed. Bryant was quiâ€twitter.com/i/web/status/1â€¦3r
cnni

1:31 am ET January 29, 2020 RETWEET
The world has never had more advanced medical science, but it's also never been so interconnected. So what can be dâ€twitter.com/i/web/status/1â€¦lR
cnni

1:12 am ET January 29, 2020 RETWEET
RT @camanpour: Trump said he wanted his peace plan to be a "win/win". Where is the win for the Palestinians? Jared Kushner: "He's delivereâ€¦
sarasidnerCNN

1:06 am ET January 29, 2020 RETWEET
It has been described as one of the oldest and most played sports in history. But, World Chase Tag is the first andâ€twitter.com/i/web/status/1â€¦hN
cnni

1:01 am ET January 29, 2020 RETWEET
The number of confirmed cases of the Wuhan coronavirus in China has now officially exceeded that of the SARS outbreâ€twitter.com/i/web/status/1â€¦4P
cnni