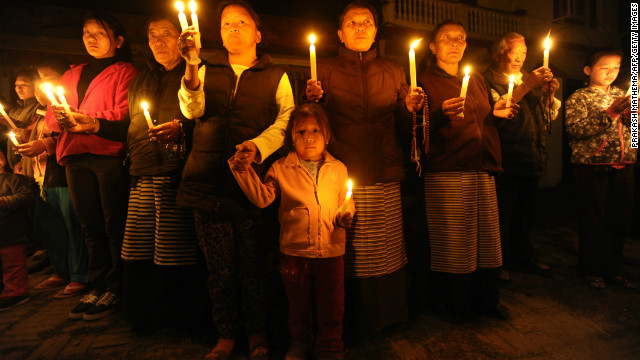 Tibetans-in-exile hold a candlelight vigil following the self-immolation attempt by a monk in Kathmandu on February 13, 2013.
February 14th, 2013
05:42 AM ET

The number of Tibetans in China who have set themselves on fire to protest Beijing's rule has reached 100, according to Tibetan advocacy groups.

Lobsang Namgyal, a 37-year-old former monk, set himself on fire earlier this month in Aba prefecture, known in Tibetan as Ngaba, an ethnically Tibetan area of the Chinese province of Sichuan, according to Free Tibet, a London-based advocacy group.

"This grim milestone should be a source of shame to the Chinese authorities who are responsible and to the world leaders who have yet to show any leadership in response to the ongoing crisis in Tibet," said Stephanie Brigden, the director of Free Tibet.

Self-immolation has become a desperate form of protest in recent years for ethnic Tibetans unhappy with Chinese rule, and it shows no sign of abating.