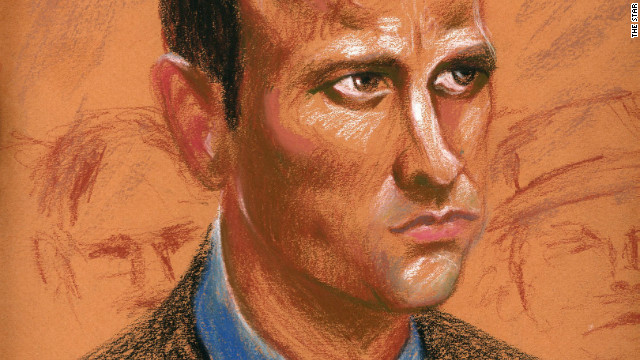 Following is a partial text of Oscar Pistorius' affidavit handed out in a South African court on Tuesday as he sought bail after being accused of murdering his girlfriend, model Reeva Steenkamp, on Valentine's Day.

16.2 I have been informed that I am accused of having committed the offence of murder. I deny the aforesaid allegation in the strongest terms.

16.3 I am advised that I do not have to deal with the merits of the case for purposes of the bail application. However, I believe that it is appropriate to deal with the merits in this application, particularly in view of the Stateâ€™s contention that I planned to murder Reeva. Nothing can be further from the truth and I have no doubt that it is not possible for the State to present objective facts to substantiate such an allegation, as there is no substance in the allegation. I do not know on what different facts the allegation of a premeditated murder could be premised and I respectfully request the State to furnish me with such alleged facts in order to allow me to refute such allegations.

16.4 On the 13th of February 2013 Reeva would have gone out with her friends and I with my friends. Reeva then called me and asked that we rather spend the evening at home. I agreed and we were content to have a quiet dinner together at home. By about 22h00 on 13 February 2013 we were in our bedroom. She was doing her yoga exercises and I was in bed watching television. My prosthetic legs were off. We were deeply in love and I could not be happier. I know she felt the same way. She had given me a present for Valentineâ€™s Day but asked me only to open it the next day.

16.5 After Reeva finished her yoga exercises she got into bed and we both fell asleep.

16.6 I am acutely aware of violent crime being committed by intruders entering homes with a view to commit crime, including violent crime. I have received death threats before. I have also been a victim of violence and of burglaries before. For that reason I kept my firearm, a 9 mm Parabellum, underneath my bed when I went to bed at night.

16.7 During the early morning hours of 14 February 2013, I woke up, went onto the balcony to bring the fan in and closed the sliding doors, the blinds and the curtains. I heard a noise in the bathroom and realised that someone was in the bathroom.

16.8 I felt a sense of terror rushing over me. There are no burglar bars across the bathroom window and I knew that contractors who worked at my house had left the ladders outside. Although I did not have my prosthetic legs on I have mobility on my stumps.

16.9 I believed that someone had entered my house. I was too scared to switch a light on.

16.10 I grabbed my 9mm pistol from underneath my bed. On my way to the bathroom I screamed words to the effect for him/them to get out of my house and for Reeva to phone the police. It was pitch dark in the bedroom and I thought Reeva was in bed.

16.12 It filled me with horror and fear of an intruder or intruders being inside the toilet. I thought he or they must have entered through the unprotected window. As I did not have my prosthetic legs on and felt extremely vulnerable, I knew I had to protect Reeva and myself. I believed that when the intruder/s came out of the toilet we would be in grave danger. I felt trapped as my bedroom door was locked and I have limited mobility on my stumps.

16.13 I fired shots at the toilet door and shouted to Reeva to phone the police. She did not respond and I moved backwards out of the bathroom, keeping my eyes on the bathroom entrance. Everything was pitch dark in the bedroom and I was still too scared to switch on a light. Reeva was not responding.

16.14 When I reached the bed, I realised that Reeva was not in bed. That is when it dawned on me that it could have been Reeva who was in the toilet. I returned to the bathroom calling her name. I tried to open the toilet door but it was locked. I rushed back into the bedroom and opened the sliding door exiting onto the balcony and screamed for help.

16.15 I put on my prosthetic legs, ran back to the bathroom and tried to kick the toilet door open. I think I must then have turned on the lights. I went back into the bedroom and grabbed my cricket bat to bash open the toilet door. A panel or panels broke off and I found the key on the floor and unlocked and opened the door. Reeva was slumped over but alive.

16.16 I battled to get her out of the toilet and pulled her into the bathroom. I phoned Johan Stander (â€śStanderâ€ť) who was involved in the administration of the estate and asked him to phone the ambulance. I phoned Netcare and asked for help. I went downstairs to open the front door.

16.17 I returned to the bathroom and picked Reeva up as I had been told not to wait for the paramedics, but to take her to hospital. I carried her downstairs in order to take her to the hospital. On my way down Stander arrived. A doctor who lives in the complex also arrived. Downstairs, I tried to render the assistance to Reeva that I could, but she died in my arms.

16.18 I am absolutely mortified by the events and the devastating loss of my beloved Reeva. With the benefit of hindsight I believe that Reeva went to the toilet when I went out on the balcony to bring the fan in. I cannot bear to think of the suffering I have caused her and her family, knowing how much she was loved. I also know that the events of that tragic night were as I have described them and that in due course I have no doubt the police and expert investigators will bear this out.

For many trans people, Russia's invasion of Ukraine has made it much more difficult to be who they are. cnn.it/3iB3D1e
cnni

11:00 am ET December 3, 2022 RETWEET
One passenger was killed and four injured when a â€śrogue waveâ€ť hit their cruise ship during a storm earlier this wtwitter.com/i/web/status/1â€¦KW4Ki0
cnni

For many trans people, Russia's invasion of Ukraine has made it much more difficult to be who they are. cnn.it/3iB3D1e
cnni

11:00 am ET December 3, 2022 RETWEET
One passenger was killed and four injured when a â€śrogue waveâ€ť hit their cruise ship during a storm earlier this wtwitter.com/i/web/status/1â€¦KW4Ki0
cnni