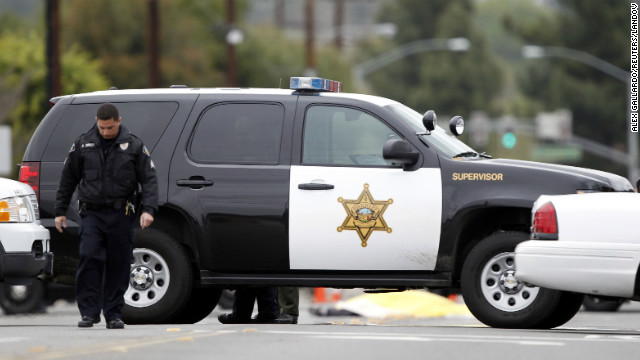 A man, believed to be the shooter, lies dead in the street near an Orange County sheriff's vehicle in Villa Park, California.
February 19th, 2013
04:09 PM ET

[Updated at 8:26 p.m. ET] In the middle of a shooting spree that killed three people and unleashed terror on Southern California motorists Tuesday morning, Ali Syed told one of his carjacking victims to walk away, police say.

"Mr. Syed ... said, 'I don't want to hurt you, I killed somebody. Today's my last day. Give me your keys,'" Tustin Police Chief Scott Jordan told reporters.

According to preliminary accounts from police, Syed, 20, didn't intentionally spare another target.

Police say they believe Syed, a part-time college student, fatally shot a woman at his family's Ladera Ranch home before killing two other people - including a senior citizen executed outside his vehicle - and wounding three others as he fired a shotgun at Orange County motorists on the Costa Mesa Freeway and committed three carjackings.

The spree ended when Syed died after he turned his gun on himself as police approached on a road north of Tustin, authorities say.