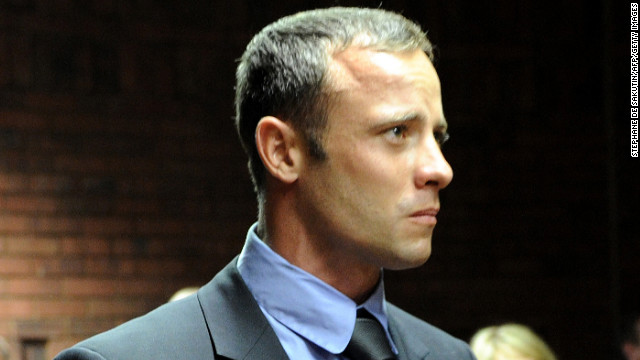 [Updated 10:40 a.m. ET] So, that's about it from the Pretoria courtroom. To sum up: A magistrate granted bail to Pistorius after giving a roughly 90-minute speech in which he covered the history and law of South African bail, summarized the case, criticized the police investigation and expressed skepticism about Pistorius' account.

Chief Magistrate Desmond Nair said the former chief investigator in the case, Hilton Botha, had made "several errors and concessions" during his testimony this week, and said prosecutors had failed to prove that Pistorius was a flight risk or had a propensity toward violence.

Pistorius will be free pending trial, as long as he meets the conditions listed below.

[Updated 10:35 a.m. ET] Pistorius' uncle, Arnold Pistorius, has told reporters the following on the behalf of the Pistorius family:

"We are in mourning over the death of Reeva, with her family. We also grateful for the ... magistrate to come to the conclusion, and for our legal team that has delivered extremely professional and legal (services) that led to the decision to give him bail today.

"As a family we know that Oscar’s version of what happened at that tragic night, and we know that that is the truth, and that will prevail in the coming court cases."

"Very sad time for us. Somebody has lost a life."

Pistorius' lawyer Barry Roux says that "it's going to take some time before we get to the trial."

Roux says he might challenge some of the bail conditions, including the one that bars Pistorius from drinking alcohol.

"He will be freed today. I think it is fair that he is granted bail," Roux says.

- He must surrender his passport and firearms.

- He cannot go near an airport.

- He will have no access to his house in Pretoria.

- He must appear at a police station every Monday and Friday.

This raising of the bail - four times the initial amount announced just minutes earlier - happened after some discussion in the courtroom.

The next court date has been scheduled for June 4.

[Updated 9:43 a.m. ET] Here are the conditions: Bail has been set at 250,000 South African rand - the equivalent of roughly 28,500 U.S. dollars. Pistorius has to surrender his passport, and he is not allowed to return to his home.

The magistrate's main concern was whether Pistorius was a flight risk, and the state had no good refutation to the argument that "he's famous, he's disabled ... he's not going anywhere," Toobin says.

We're still waiting for the magistrate to announce bail conditions.

[Updated 9:35 a.m. ET] We expect the announcement of bail conditions to come next.

More on the courtroom reaction: CNN's Diane McCarthy reports Pistorius' relatives were hugging each other quietly under the glare of many cameras. As they wait for the bail conditions, they are quiet and not celebrating.

[Updated 9:29 a.m. ET] The magistrate, having indicated that Pistorius will be granted bail, is taking another break.

[Updated 9:24 a.m. ET] "I come to the conclusion that the accused has made a case to be released on bail," the magistrate says.

A "yes" is exclaimed in the courtroom. Not sure who said that yet. Pistorius is led away from the courtroom. His family members shake hand, looking tired and relieved rather than happy.

The magistrate, summarizing his decision in the last moments of his more-than-90-minute explanation, says that he couldn't find that Pistorius was a flight risk, or that he showed a propensity to commit violence, or that he'll interfere with state witnesses, or that the public would rise up in anger when he's released.

[Updated 9:21 a.m. ET] Regarding possibly denying bail because there could be public disorder if Pistorius is released, the magistrate says that the state hasn't established that there is that level of public outrage.

Again, so far, it doesn't appear that the magistrate has yet come upon grounds to deny the bail. The session continues.

[Updated 9:16 a.m. ET] The magistrate is citing more case history and law on bail. This session to announce whether to grant Pistorius bail, including a five-minute break, has gone on for about an hour an a half.

[Updated 9:13 a.m. ET] Magistrate Nair says that the potential grounds for withholding bail because Pistorius would be a danger "has not been established."

So far, Nair hasn't found any grounds to deny the bail. But he's still talking.

Nair cast doubt on whether Pistorus would “duck and dive all over the world” given his assets in South Africa.

The magistrate is now talking about whether he should deny bail on the grounds that Pistorius might be a danger to society if he's released.

[Updated 9:07 a.m. ET] The magistrate says that the state cannot show that its case is so strong that Pistorius would necessarily come to the conclusion that he needs to flee or evade his trial. That seems to favor Pistorius.

Magistrate Nair now is talking about whether he believes he should deny bail based on any contention that Pistorius might flee because he doesn't have enough ties to South Africa.

As Nair mentions Pistorius' assets, Pistoriys puts his head in his hands.

[Updated 9:02 a.m. ET] The magistrate is now pointing out what he says are weaknesses in Pistorius' explanation that he thought he was shooting an intruder.

[Updated 8:59 a.m. ET] "I cannot agree with contention that concessions and the credibility of a detective on the level on a warrant officer ... necessarily means that the state case is not strong," the magistrate says.

Pistorius is motionless as he listens. His family and friends are sitting still with hands clasped. All hanging on the magistrate's words.

[Updated 8:57 a.m. ET] The magistrate now shifts: He says that while it's important that former lead investigator Hilton Botha made concessions, "Botha is not the state case."

[Updated 8:52 a.m. ET] The magistrate continues to poke holes in the former lead investigator's testimony, and the manner in which he investigated the case.

"I feel that (former lead investigator Botha) could have done more to establish if (Pistorius) had other ... reported cases if violence was involved," the magistrate says.

The magistrate also points out Botha could have contaminated the crime scene by not wearing protective covers on his footwear, though the magistrate says that by the time Botha arrived, much of the scene would have processed.

[Updated 8:49 a.m. ET] The magistrate is now pointing to "errors and concessions" that the former lead investigator in the case, Hilton Botha, made during cross-examination in the multi-day bail hearing.

[Updated 8:44 a.m. ET] The magistrate is back. He's now talking about how the law gives possible grounds for denying bail in any case in South Africa.

[Updated 8:42 a.m. ET] So, the magistrate talked for about an hour as a preamble to the bail decision, which still is to come. In that hour, he gave a meticulous summary of law on televised access to courtrooms, a summary of the arguments by the prosecution and the defense, a look at the history of bail law in South Africa, and his determination that, when considering whether to grant bail, he'll indeed approach this case as one in which Pistorius is accused of premeditated murder.

[Updated 8:38 a.m. ET] After all that, the magistrate has called for a five-minute break. He's not made the bail announcement yet.

[Updated 8:37 a.m. ET] The state has presented "enough ... to have met the threshold to establish ... (alleged) premeditated murder from which" to consider a bail application, the magistrate says.

[Updated 8:34 a.m. ET] We might be getting to the bail decision shortly, as the judge is summing up the state's argument again.

[Updated 8:32 a.m. ET] The magistrate is going to great lengths to explain the history of and law regarding bail in South Africa.

[Updated 8:26 a.m. ET] Pistorius' father and uncle were messaging on their phones as the judge summed up the arguments, CNN's Diane McCarthy says from the courtroom.

The judge is now explaining law regulating bail in South Africa - such as the state can deny bail only if it provides convincing facts that show the accused should remain detained.

[Updated 8:12 a.m. ET] The magistrate still is outlining the case before announcing the bail decision. Pistorius started crying when the magistrate, reviewing the relationship between the Olympian and Steenkamp, said that Steenkamp "really (loved) Oscar."

[Updated at 4:56 a.m. ET] Roux argues that Pistorius is not a flight risk, because he cannot go unnoticed through an airport due to his legs.  His prostheses also need maintenance, and he requires regular medical treatment.

[Updated at 4:51 a.m. ET] Pistorius cried while the defense talked about him pulling Steenkamp out of the bathroom.

[Updated at 4:50 a.m. ET] Pistorius' defense attorney Barry Roux says the prosecution 'admits' his client was 'firing blindly,' which is inconsistent with murder. He says the charge is not wanting to kill Reeva but a burglar.  The judge asks him if the intent was still to kill, even if he thought it was an intruder.  What would the charge be then?  Roux answers it would be culpable homicide.

[Updated at  4:34 a.m. ET] New investigating officer made an appearance in court today. Court is back in session.

[Updated at  4:05 a.m. ET] Prosecutor Nel asks the court to refuse bail, argues the athlete is a flight risk.  A discourse with the judge ensues. The judge asks what kind of life Pistorius would lead, if he fled.  The prosecutor answers it would be a life of freedom. The judge counters it would be a life of ducking daily made more difficult due to his prostheses.  Nel says that the court cannot give Pistorius special treatment because of his disability.

[Updated at  3:57 a.m. ET] The prosecutor says that although Pistorius is afraid of crime, his front was door unlocked.

[Updated at  3:54 a.m. ET] Nel calls  the violence in this case is horrific, says it must have been terrifying for Steenkamp.  Pistorius is silent, as the prosecutor says that he had gotten away in the past with making violent threats and discharging a firearm.  Nel argues that many 'important' people have gotten bail and fled the country in the past.

[Updated at  3:49 a.m. ET] This is a very serious crime, Nel says.  The state president has asked that crimes against women and children be prioritized.  He says the court needs to ensure the suspect will stand trial.

[Updated at  3:45 a.m. ET] Nel questions why Pistorius fired four shots through the toilet door without asking himself were Steenkamp was. Why wouldn't someone realize that she was in there?  He goes after the defense's previous criticism of the investigator.

[Updated at 3:36 a.m. ET] The prosecution acknowledges that Pistorius cried at the scene of the killing and told people he thought she was a burglar. But this should be seen in the light of an improbable defense.  Pistorius' sister appears confused by this and is holding her hand to her mouth.

[Updated at 2:58 a.m. ET] Many family members have now arrived in court. Oscar, his father and brother are expected soon. Photographers are snapping photos.