"These items have been banned for more than 11 years and will add little value to the customer security process flow in relation to the additional risk for our cabin staff and customers," Anderson said in a letter to the head of the TSA.

Sudan and South Sudan signed an agreement Friday to soon withdraw their respective military forces from a demilitarized zone between the two African countries, officials from both nations said.

School boards in South Dakota will be permitted to let school employees, hired security personnel or volunteers carry guns in schools under a law signed Friday by Gov. Dennis Daugaard.

Under these programs, the school boards can arm people "to secure or enhance the deterrence of physical threat and defense of the school, its students, its staff, and members of the public on the school premises against violent attack," according to the legislation.

A U.N. agency has dispatched a team to collect 21 U.N. peacekeepers from Syrian rebels who detained them earlier this week, but the effort has been called off due to darkness, a U.N. spokeswoman says.

The peacekeepers, identified by the Philippine government as Filipino, were detained in a Syrian village near the Golan Heights on Wednesday. Syrian opposition coalition President Moaz al-Khatib said Thursday that the rebels took the peacekeepers for the peacekeepers' own safety due to fighting there. 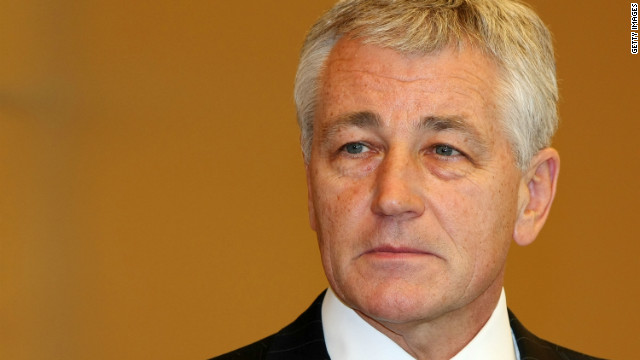 The first Vietnam veteran to be U.S. defense secretary is spending his first overseas trip on the job thanking soldiers and Marines.

At about 11 a.m. ET Friday, Chuck Hagel touched down in Kabul, Afghanistan. On the plane taking him there, he told reporters that the main reason for going was to thank the troops.

The Catholic cardinals gathered in Rome voted Friday to begin the secret election, or conclave, to elect a new pope next Tuesday afternoon, the Vatican said.

The 115 cardinal-electors taking part in the conclave will enter the closed-door process after a morning Mass, the Vatican said. Only those younger than 80 are eligible to vote. 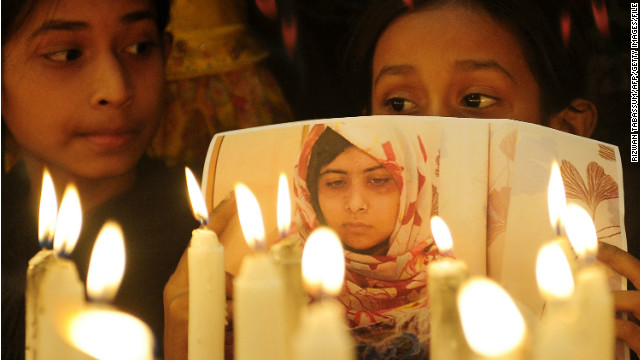 Malala on the mend, dad says

Malala Yousafzai, the Pakistani girl shot and wounded over her advocacy for the education of girls in her country, is "recovering very well, very fast," her father said in a CNN interview Friday.

Speaking in an interview with CNN's Becky Anderson, Ziauddin Yousafzai said his daughter - who he described as "strong" and "fit physically" - has had an international impact.

"When she was stopped and the militants wanted to stop her locally, they could not succeed. Because now she is a global icon for the rights of the girls...," he said. Gordon Brown, U.N. special envoy for global education, was a participant in the interview. He said July 12, Malala's 16th birthday, would become "Malala Day."

Giffords to get Profile in Courage Award

Gabrielle Giffords, the former congresswoman from Arizona who was shot and wounded in a 2011 shooting, has been named this year's recipient of the John F. Kennedy Profile in Courage Award, the JFK Library said.

Giffords, who has embarked on gun control efforts with her husband Mark Kelly despite the injury she suffered from the shooting, is being honored for her "political, personal, and physical courage she has demonstrated in her fearless public advocacy for policy reforms aimed at reducing gun violence."

She will receive the award at a ceremony in Boston on May 5th.

$85 billion in automatic across-the-board cuts became law last week, as President Obama and Congress struggle to find a solution to the crisis.Â  Watch CNN.com Live for continuing coverage of this story.

The Jodi Arias trial is in recess until Wednesday, March 13

10:30 am ET - The funeral of Hugo Chavez - Heads of state and dignitaries from dozens of countries gather in Caracas for the state funeral of Venezuelan President Hugo Chavez.Â  Nicolas Maduro will be sworn in as interim president at 6:30 pm ET.

END_OF_DOCUMENT_TOKEN_TO_BE_REPLACED 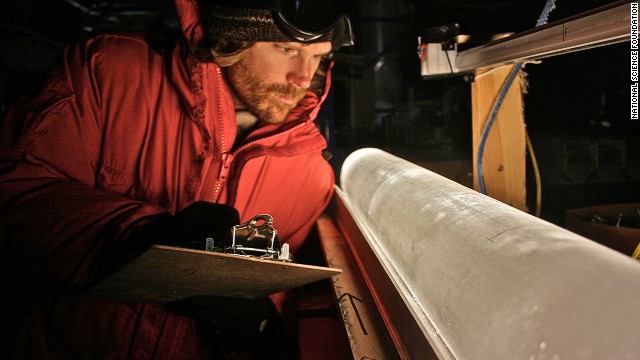 A scientist looks at an ice core from the West Antarctic Ice Sheet Divide coring site.
March 8th, 2013
05:23 AM ET

Global warming has propelled Earth's climate from one of its coldest decades since the last ice age to one of its hottest - in just one century.

A heat spike like this has never happened before, at least not in the last 11,300 years, said climatologist Shaun Marcott, who worked on a new study on global temperatures going back that far.

Things are set to get much worse in the future.

Leaders from all over the world were in Venezuela Friday for the funeral of Hugo Chavez, joining a nation that continued to mourn.

One of the heads of state that had arrived early Friday was Iranian President Mahmoud Ahmadinejad who had kind words for Chavez as he came off a plane in the capital, Caracas.

"He was a dear friend of all nations worldwide," Ahmadinejad said to the crowd and the Venezuelan state broadcaster VTV there. "He was the emotional pillar for all the revolutionary and freedom-seeking people of the region and the world."

The funeral for Chavez, who died at 58 Tuesday after a battle with cancer, will be held Friday in Caracas. That night Nicolas Maduro, who was the nation's vice president, is scheduled to be sworn in as interim president.

Eight South African officers appeared in court Friday over accusations they were involved in dragging a man down a road while he was handcuffed to the back of a police van.

The incident was captured on video late last month, sparking outrage in a nation that has seen a series of police brutality incidents recently.

Last week, authorities disarmed and suspended the officers, and arrested them.

Pop singer Justin Bieber was checked at a London hospital Thursday night after feeling ill during a concert at the O2 Arena, his representative said.

Bieber felt woozy toward the end of the concert and paused the show to receive "oxygen and treatment backstage," according to the rep.

During the show, the pop star's manager Scooter Braun told the crowd that Bieber was "backstage with the EMTs and the doctor" after getting "very light of breath," in a statement posted on YouTube.

To the cheers of fans, Braun went on to say, "He has just told me ... he's going to come out and finish the show."

After the concert, he was taken to a hospital as a precautionary measure.

North Korea on Friday responded to tougher sanctions from the U.N. Security Council with another barrage of vitriol, repeating a vow to ditch all nonaggression pacts with the South.

A day after the isolated regime in Pyongyang had threatened a possible "preemptive nuclear attack" - something analysts say they think it is unlikely and currently unable to do - its official news agency reeled off a number of agreements with South Korea that it said would no longer apply.

It's the latest installment in a week of furious rhetoric from the North, fueled by its anger over the U.N. vote on the new sanctions, a response to the Pyongyang's recent nuclear test, and joint military drills by the United States and South Korea, which take place in the region each year.

Bin Laden's son-in-law to be in New York courtroom

Osama bin Laden's son-in-law is scheduled to be in a New York City courtroom Friday morning to face charges of trying to kill Americans.

Sulaiman Abu Ghaith, who served as an al Qaeda spokesman, was captured and taken to the United States, federal officials announced Thursday.

"No amount of distance or time will weaken our resolve to bring America's enemies to justice," Attorney General Eric Holder said in a statement Thursday. "To violent extremists who threaten the American people and seek to undermine our way of life, this arrest sends an unmistakable message: There is no corner of the world where you can escape from justice because we will do everything in our power to hold you accountable to the fullest extent of the law."

Abu Ghaith was captured within the past week in Jordan, according to a spokesman for U.S. Rep. Peter King of New York.