[Updated at 6:25 p.m. ET] That will wrap up our live blog of Francis' debut. For more coverage, check out the links above and read our full story.

[Updated at 5:52 p.m. ET] When Pope Francis is formally installed in a Mass later this month, U.S. Vice President Joe Biden will be there, leading the U.S. delegation to the event.

Biden is the first Roman Catholic to serve as vice president.

Meanwhile, Argentine President Cristina Fernandez de Kirchner has congratulated Pope Francis - a native Argentine - and expressed hope that he will work toward justice, equality and peace for all.

As we noted earlier, the new pope has clashed with the Argentine government over his opposition to gay marriage and free distribution of contraceptives. 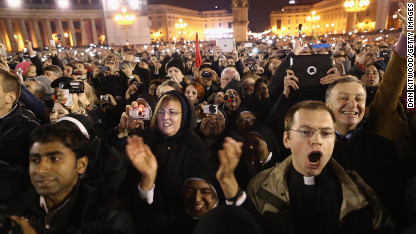 [Updated at 5:33 p.m. ET] We know a little more about what Pope Francis will be doing tomorrow: He and the cardinals will hold a Mass in the Sistine Chapel at 5 p.m. local time (noon ET), Vatican spokesman the Rev. Tom Rosica told CNN.

[Updated at 5:16 p.m. ET] A Vatican spokesman says Francis will be a reformer, and will call the church "back to basics."

"He knows the Curia, he's been extremely critical of the mess here," the Rev. Tom Rosica said, referring to the Vatican bureaucracy.

[Updated at 5:07 p.m. ET] Here's something that a pope has never had the chance to do before today: Shortly after Francis was elected, he placed a phone call to his predecessor, Benedict XVI, who has been staying at a papal retreat at Italy's Castel Gandolfo since he resigned February 28.

Benedict, 85, was the first pope to resign in hundreds of years.

News of the phone call came from the Rev. Tom Rosica, a Vatican spokesman.

[Updated at 4:53 p.m. ET] We've just been given confirmation about which Francis the new pope is honoring in his choice of name.

The new pope took the name Francis in honor of St. Francis of Assisi because he is a lover of the poor, Vatican spokesman the Rev. Tom Rosica told CNN.

Before Francis was elected, Vatican spokesman the Rev. Federico Lombardi said that the new pope will “very probably” say Mass this Sunday at St. Peter’s and do the traditional Angelus blessing, Lombardi said before the election.

It will take several days before there is an installation Mass, because it will take time for world leaders to arrive, Lombardi had said.

Obama offered his prayers and "warm wishes" Wednesday to newly elected Pope Francis. Obama called him "a champion of the poor and the most vulnerable among us," and also said his election as "the first pope from the Americas ... speaks to the strength and vitality of (that) region."

[Updated at 4:44 p.m. ET] The pope's election has caught the attention of the Internet crowd, to put it lightly. Facebook says that its users' top terms about 70 minutes ago were:

"As a youth, and as a Catholic student, and as a Mexican, I am absolutely overwhelmed with emotion (at) the fact that we have a new pope that will represent that part of the (world)," a woman from Ciudad Juarez, Mexico, told CNN. "That is something very exciting. I feel that Mexico has been a country that has suffered a lot, and so has Latin America, but it is a people that has always put trust in God, so it is absolutely wonderful to represent our part of the world this time around."

Beside her, a woman from Mexico City said her heart jumped when she heard the announcement that a pope had been picked.

[Updated at 4:22 p.m. ET] Let's take a look at some reaction to Francis' election. Here's what Cardinal Timothy Dolan of New York - by some accounts a pre-conclave contender for the papacy - had to say, shortly after he participated in the conclave:

“Pope Francis I stands as the figure of unity for all Catholics wherever they reside," Dolan said in a statement released by the United States Conference of Catholic Bishops. “Intense prayer from all around the world surrounded the election of Pope Francis I. The bishops of the United States thank God for the guidance of the Holy Spirit and the inspired choice of the College of Cardinals.”

And the Church of England, the country's official church denomination, offered a prayer Wednesday for the newly elected pope.

"Guide him by by your spirit, give him grace to lead people in prayer and zeal, and to follow in the footsteps of Jesus Christ, your son our Lord," the prayer read.

[Updated at 4:08 p.m. ET] CNN Vatican expert John Allen has reported previously, for the National Catholic Reporter, that the new pope may have been the runner-up in the 2005 election that saw Cardinal Joseph Ratzinger become Benedict XVI. Allen noted that there's no official account of that election - it is officially secret, after all - but various reports had Bergoglio coming in second in 2005. 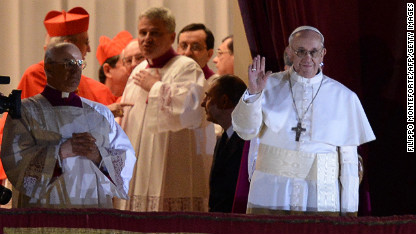 Pope Francis asked the crowd in St. Peter's Square to pray for him. "Before I give you a blessing, I ask you for a favor - I want you to bless me," he said.

As noted earlier, this is the first Pope Francis. Also, the name parallels one of the most venerated figures in the Roman Catholic Church, St. Francis of Assisi.

Allen described the name of Pope Francis as "the most stunning" choice and "precedent shattering."

"There are cornerstone figures in Catholicism" such as St. Francis, Allen said. Figures of such stature as St. Francis seem "irrepeatable - that there can be only one Francis," Allen added.

Read more about the new name, from CNN's Michael Martinez.

Moments after the new Pope Francis addressed the Vatican City crowd, a message on the pope's Twitter account - which had been dormant since Benedict XVI stepped down - said, "Habemus Papam Franciscum."

That translates, from Latin, as, "We have Pope Francis."

[Updated at 3:42 p.m. ET] After blessing the crowd, Pope Francis re-entered the basilica.

Here is video of his first public appearance as pope:

Here's more about Pope Francis, the former Cardinal Bergoglio of Argentina: He is 76, and is considered a straight-shooter who calls things as he sees them, and a follower of the church's most conservative wing. He is a former archbishop of Buenos Aires.

He has clashed with the government of President Cristina Fernandez de Kirchner over his opposition to gay marriage and free distribution of contraceptives.

Besides being the first non-European pope in the modern era, the first South American pope and the third straight non-Italian pope, he also is the first Pope Francis.

[Updated at 3:30 p.m. ET] Pope Francis has offered his blessing "to you and to the whole world." This is known as the "Urbi et Orbi" (to the city and the world) blessing.

[Updated at 3:29 p.m. ET] Pope Francis says he will shortly offer his blessing, but now he's asking the crowd to have a moment of silence to pray for him.

[Updated at 3:27 p.m. ET] Pope Francis says from the balcony (according to an English translation):

"As you know, the duty of the conclave was to appoint a bishop of Rome. It seems to me that my brother cardinals have chosen one who is from far away, but here I am.

"I would like to thank you for your embrace, also to ... the bishops, thank you very much.

"First and foremost, I would like to pray for our emeritus pope, Benedict XVI. Let us pray all of us together … so that he's blessed by the lord and guarded."

[Updated at 3:23 p.m. ET] Bergoglio, the new pope, has chosen the name Francis, according to Vatican Radio. He's now appearing on the balcony.

[Updated at 3:20 p.m. ET] Bergoglio is the first pope from outside of Europe in the modern era, the first South American pope, and the third straight non-Italian pope.

[Updated at 3:12 p.m. ET] The protodeacon is on the balcony, making the announcement.

[Updated at 3:08 p.m. ET] It is taking longer for the new pope to appear after the white smoke this year than it did for Benedict XVI to appear after his election in 2005. But, an extra step has been added this time - the new pope has been allowed to pray alone in the Pauline Chapel before he appears on the balcony.

That could account for at least some of the difference.

[Updated at 3:03 p.m. ET] It will be interesting to learn not only who the new pope is, but also what name he has chosen for himself. Popes often take a regnal name (like Benedict) that a previous pope used, and it generally is meant to point to a tone that the new pontiff wants to set, CNN senior Vatican analyst John Allen says.

For example, Pius XII, who served from 1939 to 1958, was very conservative, eminent Italian church historian Alberto Melloni told CNN. So, "if the new pope was to call himself Pius XIII, it would be a very ideological choice," he said.

Read more about what a pope's chosen name indicates, from CNN's Laura Smith-Spark.

[Updated at 2:48 p.m. ET] Here's what we're going to hear from the cardinal who will introduce the new pope:

[Updated at 2:41 p.m. ET] CNN senior Vatican analyst John Allen, on the moment that we will see the pope on the balcony of St. Peter's Basilica: "First impressions last. ... It will be very interesting to see how the new pope comports himself here tonight and makes his introduction."

[Updated at 2:30 p.m. ET] The crowd at St. Peter's Square continues to swell. "People are literally running up the block (so they can see the pope) when he comes out on the balcony for the first time," CNN's Anderson Cooper reports from the Vatican.

[Updated at 2:25 p.m. ET] From CNN's Jim Bittermann at the Vatican: The crowd waiting for the new pope represents all sorts of nationalities - "everybody from around the world."

"You see a lot of religious folks are here, different orders of nuns and priests, packing in all afternoon," as well as tourists, he said. "There are more people just as I'm speaking. All of the sudden there's been a surge of people coming in."

[Updated at 2:23 p.m. ET] Like the one in which Benedict XVI was chosen in 2005, this election didn't take long. The white smoke comes on just the conclave's second day.

We have a few steps to take before we learn who the new pope is. Here's what we've been told will happen next:

- The new pope will leave the Sistine Chapel to put on his papal robes, then re-enter the chapel for prayer with the cardinals.

- The cardinals will then line up to congratulate the new pope and promise their obedience to him.

- The pope will then go back to Pauline Chapel to pray for a few moments.

- Only then will the pope prepare to reveal himself to the public. At the balcony of St. Peter's Basilica, proto-deacon Cardinal Jean-Louis Tauran (assuming Tauran himself wasn't elected) will appear and announce the new pope's old name, and the name he will be known as from now on.

- The pope will then appear on the balcony.

[Posted at 2:09 p.m. ET] White smoke above the Sistine Chapel have made it official: The Roman Catholic Church has a new pope.

Bells are ringing at the Vatican, and thousands of people gathered in the square are cheering.

We'll find out in the minutes to come who the new pope is. Stay with us as we find out.