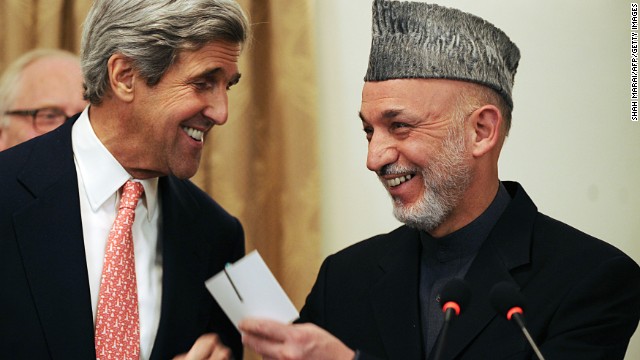 U.S. Secretary of State John Kerry made a previously unannounced stop in Afghanistan for a meeting with Afghan President Hamid Karzai on Monday, the day that a U.S.-run prison that bred tension between the nations was handed over to the Afghans.

Kerry landed in Kabul on Monday afternoon and was expected to meet with Karzai at the presidential palace later in the day.

Kerry's visit comes on the day that the United States handed over control of a U.S.-run prison near Bagram Air Base to Afghan authorities. The detention facility was a sticking point between U.S. and Afghan officials.

The visit also comes amid other tensions between Karzai and the NATO-led coalition forces that escalated after a bomb blast in Kabul this month that killed nine people. Karzai said afterward that there are "ongoing daily talks between the Taliban, Americans and foreigners in Europe and in the Gulf states."