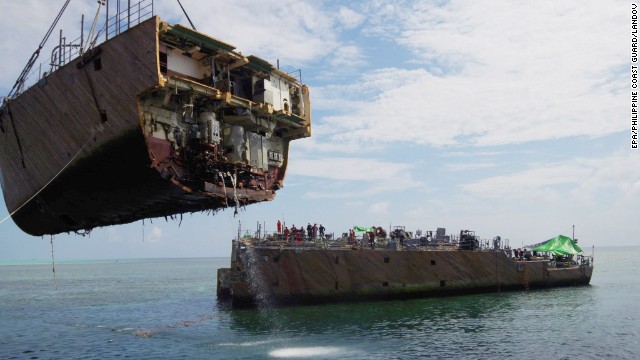 A crane vessel lifts the bow of the USS Guardian on Wednesday. The ship has been trapped on a Philippine reef since January 17.
March 27th, 2013
08:41 AM ET

The bow of a U.S. Navy warship that grounded on a Philippine reef in January was cut from the rest of the hull on Tuesday, lifted by a massive crane, and dropped on a waiting barge.

"The bow section of the USS Guardian was lifted out of the water around 2:45 p.m.," said Enrico Efren Evangelista, head of the Philippine coast guard Palawan District, according to the official Philippine News Agency.

The removal of the bow of the U.S. Navy minesweeper followed that of the ship's auxiliary engine room, a 200-ton piece that was removed a little more than an hour earlier.

With the removal of the two sections, about 900 tons of the formerly 1,300-ton warship remain on Tubbataha Reef, the news agency reported.