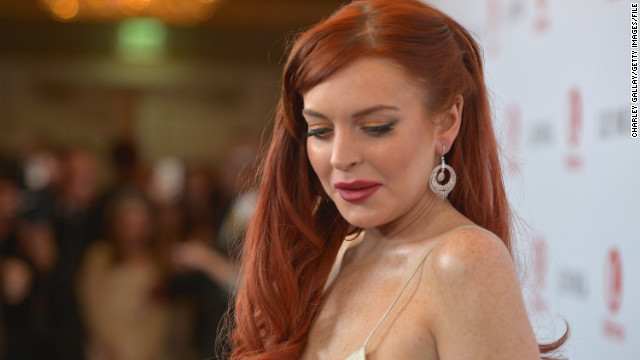 But that didn't stop the snickering.

Some poked fun at her well-publicized battle with booze.

Lindsay Lohan tweeted she's pregnant, which is great because now she'll have someone to get drunk with

Then, there were those who thought that if true, it could actually be a wonderful thing for Lohan.

@lindsaylohan It can be a beautiful chapter in your life if you're ready for it!...It can't be about Lindsay anymore. Bless

The actress has Â spent 250 days in five rehab facilities since January 2007, including one long court-ordered stint after a failed drug test.

She has appeared in court at least 21 times before four Los Angeles judges who have now found her in violation of probation six times and sentenced her to a total of nine months in jail.

And she has spent about two weeks behind bars in six trips to the Los Angeles County jail, served 35 days under house arrest and worked about 67 days of community service at the county morgue.

She isÂ dating Avi Snow, the guitarist with City of the Sun.

What did he tweet about?Â A tour stop in Missouri.

10:15 am ET October 26, 2021 RETWEET
Russian President Vladimir Putin has ordered a nationwide ban on hospitality events and catering from 11 p.m. to 6â€twitter.com/i/web/status/1â€¦PF
cnni

10:00 am ET October 26, 2021 RETWEET
Seven airlines, along with other travel industry leaders, are donating more than 20,000 airline tickets to Afghan eâ€twitter.com/i/web/status/1â€¦h9
cnni

9:45 am ET October 26, 2021 RETWEET
"Celebrity" golf coach Federico Alba reveals the hidden life of Sicily. He has forged a career that combines his loâ€twitter.com/i/web/status/1â€¦2B
cnni