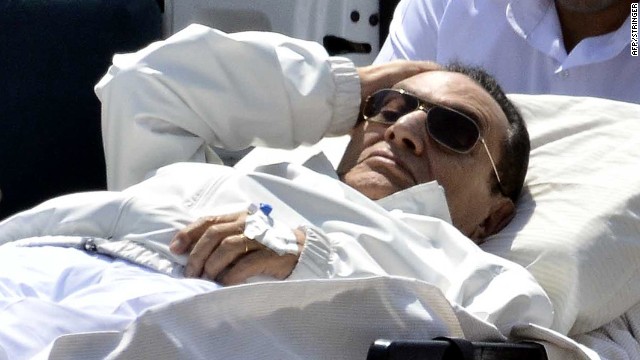 Ousted Egyptian president Hosni Mubarak is wheeled out of an ambulance following a hearing in Cairo on Saturday.
April 15th, 2013
08:26 AM ET

Former Egyptian President Hosni Mubarak will remain behind bars, even though he won an appeal in which he asked to be released while awaiting a retrial, Egyptian state-run media said Monday.

An appeals court granted his appeal Monday, technically freeing him in the case involving the killing of nonviolent protesters during the 2011 uprising that brought him down. But that action was made moot when the court also ordered that he remain detained in connection with newer corruption charges that were added to the older allegations, state media said.

State media confirmed the court's orders Monday afternoon, after conflicting reports from state media and the country's Information Ministry about whether the orders were made.