Dr. Kermit Gosnell, 72, was accused of killing babies by using scissors to cut their spinal cords. Authorities alleged that some of the infants were born alive and viable during the sixth, seventh and eighth months of pregnancy.

Monday's first-degree murder conviction means Gosnell, who is not a board-certified obstetrician or gynecologist, could be sentenced to death.

Gosnell also was accused in the death of Karnamaya Mongar, 41, who died of an anesthetic overdose during a second-trimester abortion at his West Philadelphia clinic. In that case, the jury found him guilty of involuntary manslaughter.

Gosnell was also found guilty of 21 counts of abortion of the unborn, 24 weeks or older.

In Pennsylvania, abortions past 24 weeks are illegal unless the health of the mother is at stake. 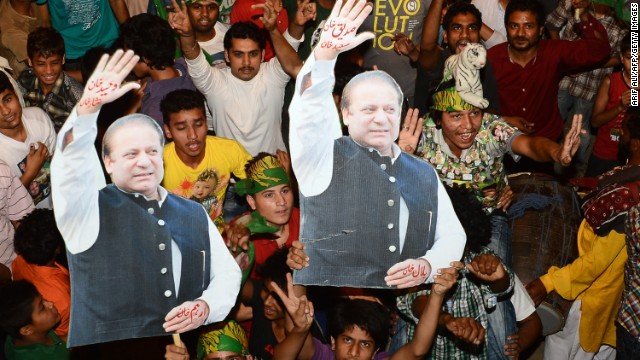 Supporters of former Pakistani Prime Minister Nawaz Sharif carry portraits of him in Lahore, Pakistan, on Sunday.
May 13th, 2013
07:48 AM ET

Ex-PM may return to power in Pakistan

Nawaz Sharif, the prime minister whose government was overthrown by a military coup more than a decade ago, appears to be back on top in Pakistan, election officials have said, despite claims by other parties of vote rigging.

According to unofficial results disclosed Sunday from the country's violence-marred elections over the weekend, Sharif's party, the Pakistan Muslim League Nawaz (PML-N), looks to have won most of the seats in the National Assembly.

One of the country's leading industrialists and richest men, Sharif has been prime minister twice before and was overthrown in a coup when Gen. Pervez Musharraf seized power in 1999. Sharif was subsequently jailed before going into exile in Saudi Arabia. He returned to Pakistan in 2007.

Ariel Castro's brothers no longer refer to him as kin. Instead, they call him "a monster" who should rot in jail after being accused of kidnapping and holding three young women hostage in his home for a decade.

"I had nothing to do with this, and I don't know how my brother got away with it for so many years," Pedro Castro, 54, said when he and brother Onil Castro, 50, sat down for an exclusive interview with CNN's Martin Savidge this weekend.

When the story first broke, the world saw all three brothers as suspects after Cleveland police arrested them last Monday and released their mugshots. It was not until Thursday that Pedro and Onil Castro were freed and investigators said the brothers had no involvement in the kidnappings.