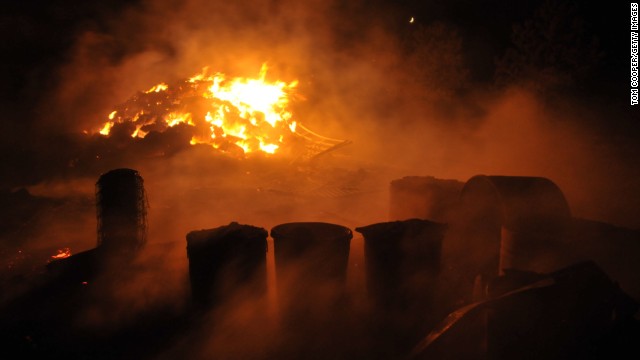 The forecast Friday provides little hope for firefighters trying to make headway against a raging wildfire northeast of Colorado Springs.

The high temperatures and blustery winds will be back, along with little chance for meaningful rain. The weather is expected to cool some over the weekend, with calmer winds, but no significant showers.

The Black Forest Fire has been dubbed the most destructive in state history after it scorched close to 16,000 acres, destroyed 379 homes and claimed at least two lives by Thursday evening.

Witnesses spoke to the two victims in the afternoon as the flames approached, El Paso County Sheriff Terry Maketa said.

"They said that they could see a glow to the west," he said. "They were packing their personal belongings, trying to get out."

"Climate change isn't the only part of the story," Higuera said, "but it's a major part of what is enabling these wâ€twitter.com/i/web/status/1â€¦c1
CNNweather

4:28 pm ET July 24, 2021 RETWEET
States of emergency have been declared in several western counties in the US as over 80 large, active fires continuâ€twitter.com/i/web/status/1â€¦lF
CNNweather

1:38 pm ET July 24, 2021 RETWEET
The pandemic year that will go down in history set records for stress, worry, anger and sadness among both men andâ€twitter.com/i/web/status/1â€¦ca
cnni

12:37 pm ET July 24, 2021 RETWEET
Flooding is a major concern as Typhoon In-fa makes landfall across China, and Nepartak has the potential to impactâ€twitter.com/i/web/status/1â€¦ae
CNNweather