Authorities evacuated the office of Mexico's state oil company due to an unspecified threat Tuesday night, the company said on its Twitter feed.

In February, a deadly blast at Pemex headquarters in Mexico City killed at least 37 people.

Officials said that blast was caused by a buildup of gas in the basement.

While a small majority of Americans are in favor of the immigration bill currently before the U.S. Senate, according to a new national poll the old and young don't see eye to eye on the issue.

And a CNN/ORC International survey also indicates that more than six in ten say border security rather than a pathway to citizenship for undocumented immigrants should be the bigger priority.

The poll's Tuesday morning release comes as a bill backed by the bipartisan 'Gang of Eight' senators faces more legislative hurdles. The measure would offer a 13-year path to eventual citizenship for the 11 million undocumented immigrants currently living in the country. If the legislation passes through the Democratic Senate, it would face an uncertain future in the Republican dominated House of Representatives.

Bomb plots targeting the New York Stock Exchange and the city's subway were among more than 50 worldwide thwarted by top-secret surveillance programs since the 2011 al Qaeda attacks on the United States, authorities said on Tuesday.

Gen. Keith Alexander, National Security Agency director, FBI and other officials revealed startling details at a House Intelligence Committee hearing aimed at finding out more about the telephone and e-mail surveillance initiatives that came to light this month through leaks of classified information to newspapers.

It was the most comprehensive and specific defense of those methods that have come under ferocious criticism from civil liberties groups, some members of Congress and others concerned about the reach of government into the private lives of citizens in the interest of national security.

Ali Haidar has a job title that may sound more like a pipe dream than an official post.

But Syria's new minister for national reconciliation said he believes the country can still unite for a political solution - even after two years of incessant bloodshed and more than 92,000 deaths.

In an exclusive interview with CNN's Frederik Pleitgen, Haidar said all parts of the Syrian government should be up for negotiation. 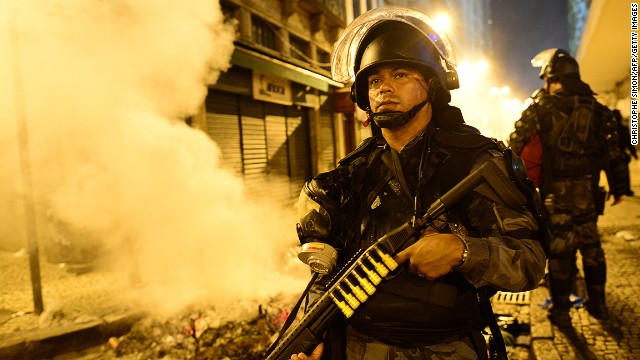 Nine cents have been enough to make tens of thousands of Brazilians cry foul for a week.

For the demonstrators who have transformed streets in Sao Paulo and Belo Horizonte into protest battlegrounds, it isn't so much that the price of a bus ticket went up from 3.00 to 3.20 reais ($1.38 to $1.47).

The small bump in fare was the straw that broke the camel's back in a much larger issue, and protesters plan to march again Tuesday to vent their anger.

Afghan forces formally took over security responsibilities for their violence-plagued country from NATO-led troops on Tuesday, marking a key transition in the long and costly war.

President Hamid Karzai also announced that a government group dedicated to Afghan peace and reconciliation will go to the Gulf state of Qatar and participate in talks with the Taliban militant group - long the adversary of the Afghan and coalition soldiers trying to keep order in the nation.

A man who paraded his cloaked 16-year-old nephew around a busy Phoenix intersection with a fake rocket-propelled grenade launcher was convicted Monday on endangerment and terrorism hoax charges.

Michael David Turley, 40, posted a video on YouTube showing the teen walking around the streets covered in a sheet and pointing the fake weapon at cars. The video went viral with over 250,000 hits.

In the video, a man says he and an actor are trying to test how police would respond to such a scene at a busy intersection.

Sarah Palin has reportedly tested positive for Covid-19, potentially delaying the start of the trial in her defamatâ€twitter.com/i/web/status/1â€¦pQ
cnni

10:15 am ET January 24, 2022 RETWEET
The official language of Coumboscuro is ProvenĂ§al, an ancient medieval neo-Latin dialect of Occitan, the language sâtwitter.com/i/web/status/1â€¦x6Y
cnni