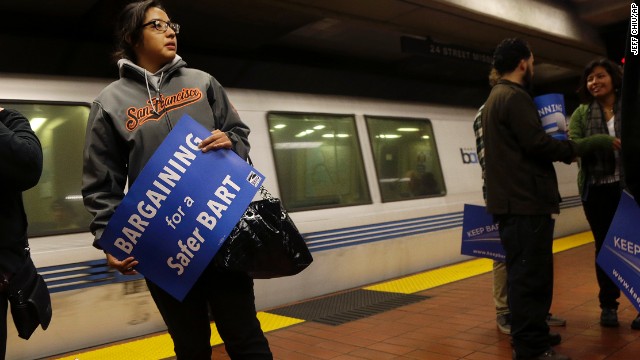 Transit workers in California's Bay Area announced Thursday that they would go on strike Sunday at midnight local time, if no progress is made in contract negotiations.

A BART official said there was no reason for the strike and it would make an effort to come to an agreement to avoid a service stoppage. 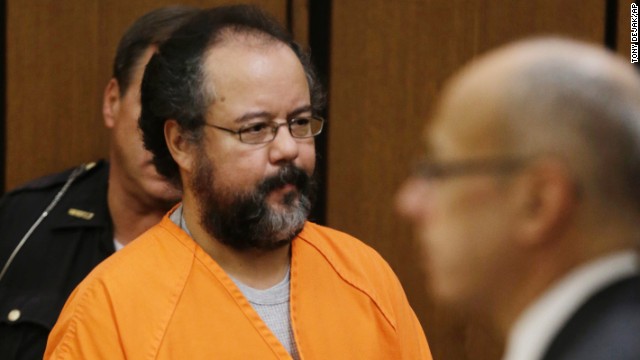 Cleveland kidnapper gets life, plus 1,000 years

After a statement from Ariel Castro - the Cleveland man who held three women captive and sexually abused them for the better part of a decade - and powerful words from one of his victims, a judge sentenced him Thursday to life in prison plus 1,000 years. 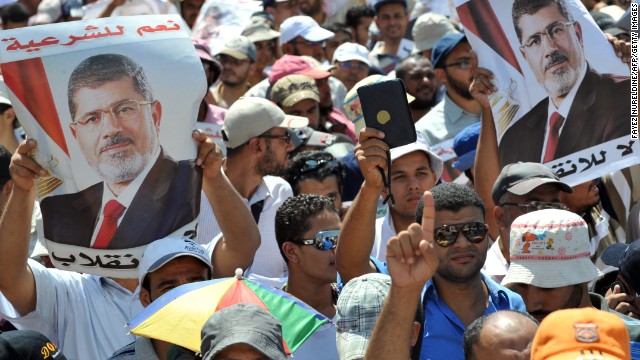 A group supporting deposed Egyptian President Mohamed Morsy have called for a million-man march from 33 different mosques Friday following noon prayers under the banner of "Egypt against the coup," according to a statement released Thursday by the Anti-Coup Prodemocracy Alliance.

They also called on "all free people in all countries of the world to demonstrate peacefully" in support of their marches, according to the statement.

Jamaat is one of two main opposition parties and a constant thorn in the side of the ruling Awami League.

With the declaration, Jamaat will not be able to take part in the country's upcoming general election - certainly welcome news to Prime Minister Sheikh Hasina.

But such a ruling can also reignite a fresh round of political unrest in the South Asian nation.

They've been a couple for two years and are eager to raise two children together. But it wasn't until Thursday that Holli Bartelt and Amy Petrich were allowed to legally wed.

They wasted no time.

They made plans to tie the knot one minute after a law permitting gay marriage went into effect in their home state of Minnesota.

At 12 a.m. Thursday, Minnesota and Rhode Island officially became the latest among 13 states - and the District of Columbia - to allow same-sex marriage. Both states passed applicable laws in May.

Edward Snowden is in good health in Russia and his lawyer there is amenable to hammering out an ending that would satisfy all. This, according to his father's lawyer, Bruce Fein, who appeared on "Anderson Cooper 360" on Wednesday night.

He relayed the conversation he had with Russian lawyer Anatoli Cuchara.

"There may be a time, where it would be constructive to try and meet and see whether there can't be common ground that everyone agrees would advance the interest, the United States, Mr. Snowden, Lon, his father and the interest of Russia in trying to resolve this in a way that honors due process and the highest principles of fairness and civilization," Fein said.

Snowden is afraid he would not get a fair trial if he came back to the United States.

Rapist custody rights: Most states have them

When an Ohio judge denied a request for Cleveland kidnapping suspect Ariel Castro to visit the 6-year-old girl he fathered with one of the women he kidnapped and raped, the reason seemed pretty clear cut.

The idea that Castro - who will be sentenced Thursday after pleading guilty to 937 counts - would have any parental rights is hard to believe. But in 31 states, rapists do enjoy the rights of a father.

Ohio currently has no laws that would take away Castro's parental rights for fathering the child with Amanda Berry, who he abducted in 2003 when she was a teenager.

An eastern Pennsylvania police chief who went on a profanity-laced video rant against those who disagreed with him on gun laws has been suspended for 30 days without pay.

The punishment wasn't for his diatribe though.

The borough council in the coal town of Gilberton said that police Chief Mark Kessler used "burough property for non-burough purposes without permission" when he made the video where he's seen shooting semiautomatic and automatic weapons.

The Ohio man who imprisoned three women in his Cleveland home for a decade will speak at length during his sentencing Thursday, delivering a statement that his sister promises will allow people to see "the other side of Ariel Castro."

Castro pleaded guilty last week to 937 counts, including murder and kidnapping, in a deal that dropped a possible death penalty in exchange for life in prison plus 1,000 years.

He'll give a rather lengthy statement, explaining his life and who he really is, his sister, Marisol Alicea, told CNN on Wednesday night.

Record-breaking temperatures have been searing large swaths of China, resulting in dozens of heat-related deaths and prompting authorities to issue a national alert.

People are packing into swimming pools or even taking refuge in caves amid attempts to escape the fierce temperatures. Local governments are resorting to cloud-seeding technology to try to bring rain to millions of acres of parched farmland.

Injured New York Yankees slugger Alex Rodriguez and Major League Baseball are negotiating a deal that would result in a lengthy suspension instead of a permanent ban, ESPN reported Wednesday night.
According to the "Outside the Lines" report, a source familiar with the discussions said representatives for the three-time AL Most Valuable Player and 14-time All-Star are talking with league officials.

Sam Asghari opened up about his marriage to the "amazing" Britney Spears in his first interview since their June weâ€twitter.com/i/web/status/1â€¦Gt
cnni

12:15 pm ET June 29, 2022 RETWEET
Around 4 million people died during the the man-made famine in Soviet Ukraine -- known as the "Holodomor." Daria Maâ€twitter.com/i/web/status/1â€¦Kc
cnni

11:30 am ET June 29, 2022 RETWEET
For these two Disney fans, crossing paths with their future spouse at their favorite place was a dream come true cnn.it/3I8f3lV
cnni

Sam Asghari opened up about his marriage to the "amazing" Britney Spears in his first interview since their June weâ€twitter.com/i/web/status/1â€¦Gt
cnni

12:15 pm ET June 29, 2022 RETWEET
Around 4 million people died during the the man-made famine in Soviet Ukraine -- known as the "Holodomor." Daria Maâ€twitter.com/i/web/status/1â€¦Kc
cnni

11:30 am ET June 29, 2022 RETWEET
For these two Disney fans, crossing paths with their future spouse at their favorite place was a dream come true cnn.it/3I8f3lV
cnni

Justice Stephen Breyer says he will retire Thursday, setting the stage for Ketanji Brown Jackson to take over as thâ€twitter.com/i/web/status/1â€¦Dp
cnnbrk

3:13 pm ET June 28, 2022 RETWEET
Ghislaine Maxwell has been sentenced to 20 years in prison for carrying out a years-long scheme with Jeffrey Epsteiâ€twitter.com/i/web/status/1â€¦gy
cnnbrk