A jury in Kentucky Friday night acquitted 17-year-old Joshua Young in the beating death of his stepbrother, Trey Zwicker, two years ago.

Young also was found not guilty of tampering with evidence.

Josh Gouker, Young's father, pleaded guilty to murder in Zwicker's death, and was sentenced on July 26 to life in prison. But prosecutors said Young worked with Gouker to beat Zwicker as the teen suffocated in the mud of a ditch behind a Kentucky high school.

"Trey Zwicker was brutally murdered at age 14 ... because Josh Gouker is a control freak and because Josh Young wanted to impress him," prosecutor Elizabeth Brown told the jury in Jefferson County Circuit Court during Friday's closing arguments. She said Gouker was upset with Zwicker's mother after she aborted Gouker's unborn child, and he wanted revenge.

Bulger jury breaks for the weekend

After deliberating for 28 hours over four days, a federal jury Friday broke for the weekend without announcing a verdict in the trial of reputed Boston crime boss James "Whitey" Bulger.

The eight-man, four-woman panel will resume work at 9 a.m. Monday to continue processing testimony from 70 witnesses and over 800 exhibits compiled during the seven weeks of the trial.

Bulger, 83, is accused of racketeering, including involvement in 19 killings, and also 13 counts of extortion and money-laundering during a 20-year "reign of terror" that defined South Boston from the early '70s through 1995, when Bulger fled Boston.

2 charged in case of girl who hanged herself

Two 18-year-old men face child pornography charges in connection with the case of a 17-year-old girl who hanged herself after she was allegedly gang-raped and bullied online, Canadian authorities said Thursday evening.

A police statement did not provide details, but the family of Rehtaeh Parsons has said she developed suicidal thoughts after she was sexually assaulted in 2011 and a picture of the incident was shared by phone and online.

The two men whose names were not released were arrested Thursday morning at their homes in Halifax, Nova Scotia, according to Royal Canadian Mounted Police and Halifax Regional Police.

The State Department has evacuated most of its diplomats from Lahore, Pakistan in response to a terrorist threat against the U.S. consulate, senior State Department and other senior U.S. officials told CNN.

"We have picked up what we regard as a threat worthy of taking this action," one senior U.S. official told CNN.

The State Department issued an "ordered departure" for all of its diplomats in Lahore Thursday, except for a handful of emergency personnel. The diplomats were moved to Islamabad, the nation's capital, officials said.

A travel warning issued by the State Department said the department "ordered this drawdown due to specific threats concerning the U.S. Consulate in Lahore" and warned U.S. citizens against travel to Pakistan.

The official Twitter account of the African Union Mission to Somalia identified it as an Ethiopian air force plane.

There was no immediate word on casualties. 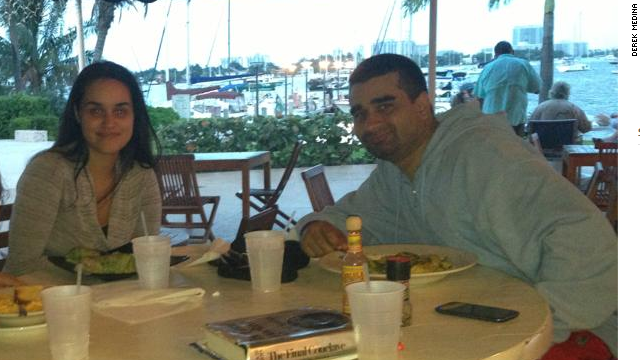 People confess to a lot of things on Facebook: their frustrations, bad habits, secret longings and new loves. A Florida man allegedly confessed to a murder Thursday on the social media website, that of his wife, whom he shot dead in their kitchen.

Derek Medina, 31, posted a picture of her blood-stained body, collapsed and contorted on the floor in the corner, to his Facebook feed with a note.

Lawyers for Usher Raymond and the singer's ex-wife plan to wage a fresh child custody battle in court Friday, days after one of their children nearly drowned in a swimming pool accident.

Five-year-old Usher Raymond V is recovering from Monday's accident at Children's Healthcare of Atlanta Hospital, according to the lawyer for his mother, Tameka Foster. A breathing tube inserted after the accident has since been removed, attorney Angela Kinley told CNN.

Foster said Wednesday on Twitter that her son was doing "much better."

The travelers provided false information related to proof of vaccination and pre-departure tests and did not complyŌĆtwitter.com/i/web/status/1ŌĆ”3N
cnni

11:00 am ET August 2, 2021 RETWEET
As reports of US diplomats and intel officials being ill from the mysterious Havana Syndrome increase, frustrationŌĆtwitter.com/i/web/status/1ŌĆ”Gp
cnni

8:45 am ET August 2, 2021 RETWEET
Canada's semifinal win over the US in the women's soccer competition at #Tokyo2020 means midfielder Quinn has becomŌĆtwitter.com/i/web/status/1ŌĆ”nB
cnni