"No one - however smart, however well-educated, however experienced - is the suppository of all wisdom," Abbott told a Liberal Party event in the city of Melbourne.

Laszlo Csatary, the Nazi war crimes suspect who was arrested last year, has died, his lawyer told Hungarian media. He was 98.

Csatary was accused of sending more than 15,000 Jews to the Auschwitz concentration camp in the spring of 1944.

Csatary was arrested in June 2012 after a Jewish rights organization discovered him living in Budapest. The Simon Wiesenthal Center considered him its most-wanted Nazi war criminal.

When James DiMaggio died in a confrontation with an FBI tactical agent deep in the Idaho wilderness this weekend, he took with him the reason why he killed a family friend and her son - and took her 16-year-old daughter captive.

His weeklong run with the teen, Hannah Anderson, spurred an intense and frantic manhunt that spanned from Southern California to Central Idaho.

It came to an end Saturday afternoon when a tip from horseback riders sent FBI agents swarming to the camping spot outside Cascade.

The world's strongest storm of the year so far plowed across the northern Philippines on Monday, killing at least one person and leaving 20 fishermen missing.

Packing winds as strong as 200 kilometers per hour (124 mph), Typhoon Utor made landfall early Monday on the east coast of the Philippine island of Luzon, damaging hundreds of houses.

"It's the strongest typhoon we've had so far on the planet this year," said CNN International meteorologist Samantha Mohr. "So that gives you some idea of the magnitude of this system."

A 30-foot-wide sinkhole formed under the Summer Bay Resort in Florida, not far from Disney World, a Lake County fire official said. 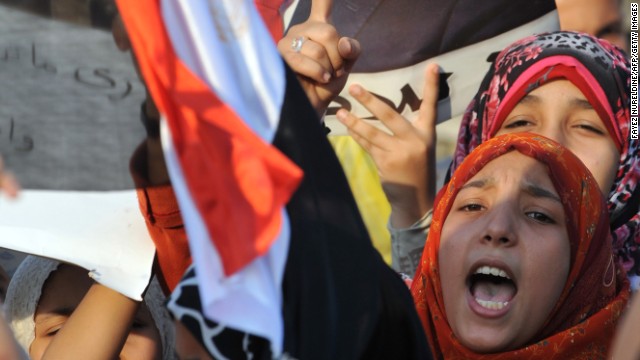 Now that Ramadan and the Muslim festival of Eid are over, staunch supporters of ousted Egyptian President Mohamed Morsy are on edge.

Thousands have camped out in the streets of Cairo for more than a month, refusing to budge until Egypt's first democratically elected president is reinstated. But the possibility of a fierce crackdown looms.

On Sunday, when asked about a possible dispersal, an interior ministry source said "all options are on the table," the state-run Ahram Online news site reported. The source added that security forces have beefed up their presence recently near the demonstrations.

We're keeping an eye on five high-profile cases this week. We may see a verdict in one (the Whitey Bulger trial), a sentence in another (the Bradley Manning case) and more fireworks in a third (the Nidal Hasan court-martial).

Also this week, the lawyer for a teen whose Facebook post landed him in jail will argue that the case be thrown out. And we wait to see if a grand jury indicts former NFL tight end Aaron Hernandez.

Kenneth Bae, the American citizen sentenced to 15 years in a North Korean labor camp, has been moved to a hospital after a serious deterioration in his health, his sister said.

Detained in North Korea in November and sentenced in April for "hostile acts to bring down its government," Bae is now suffering from severe back and leg pain and has lost more than 50 pounds, his sister Terri Chung told CNN late Sunday.

A rodeo stunt at the Missouri State Fair has come under criticism after a clown donned a Barack Obama mask and stuck a broom up his backside.

The stunt took place during the bull riding competition on Saturday night.