Jacob Allen Bennett has been detained for the killings of four people - who were between the ages of 16 and 22 - found dead in a car off a rural Tennessee road, authorities said.

Bennett, 26, was taken into custody on midnight Thursday, hours after the four victims were found. Authorities have not given a possible a motive in the case nor has Bennett been charged yet, though they've also expressed confidence they believe they have the perpetrator.

"The citizens of Cumberland County and Crossville can rest assured that we have the person who committed the crimes in custody, that the community is safe," said Tennessee Bureau of Investigation Director Mark Gwyn.

Russia and the United States will meet later this month to discuss a possible diplomatic solution to the crisis in Syria, U.S. Secretary of State John Kerry said from Switzerland on Friday, where the two nations are holding a second day of talks about Syria's chemical weapons.

Kerry said they would meet "around the United Nations General Assembly" on September 28. Kerry and his Russian counterpart, Sergey Lavrov, spoke to reporters after meeting with the joint U.N. and Arab League envoy to Syria, Lakhdar Brahimi, in Geneva.

They pledged to work toward setting a date for a long-delayed second round of peace talks involving all parties in Syria, known as Geneva II, at the meeting in New York.

Flood sirens sounded overnight as Colorado emergency officials feared that debris-caked canyons might give way and send another wall of water crashing through the city of Boulder and neighboring communities.

"All residents are warned to go to higher ground immediately due to the potential for flash flooding along the creek," Boulder's Office of Emergency Management said.

Emergency management warned that "there are mudslides at the mouth of Boulder Canyon 400 feet long and four feet deep as the sides of the canyon give way due to the saturation from the days-long rain." 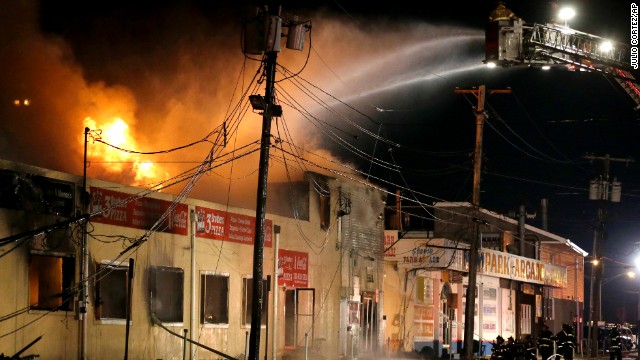 Flames do what Sandy didn't to NJ boardwalk

Billows of smoke rolled gently out over the ocean early Friday in New Jersey after firefighters defeated the behemoth blaze that spawned them.

Superstorm Sandy had left Seaside Park's boardwalk wracked but repairable a year ago. But the flames that raged for nine hours Thursday consumed four blocks of it.

By the time the fire crew of hundreds managed to corral the fire, it had destroyed or damaged 50 businesses, CNN affiliate WCBS reported.

"I feel like I want to throw up," said Gov. Chris Christie after getting a look at the fire on Thursday.

The water rose and the people fled.

Flood sirens sounded overnight as Colorado emergency officials feared that debris caked canyons might give way and send another wall of water crashing through the city of Boulder and neighboring communities.

Widespread flash flooding washed out roads, pushed dams to their limits and beyond and killed at least three people.

U.S. and Russia negotiate over Syria

As U.S. Secretary of State John Kerry sits down with his Russian counterpart Friday for a second day of talks about a possible diplomatic solution on Syria, he faces a proverbial standoff with Syrian president Bashar al-Assad.

Al-Assad demanded on Thursday that the United States call off any potential strike on Syrian government forces before he gives up his large chemical weapons arsenal.

But Kerry made it clear that the threat of a U.S. military strike remains on the table, if Syria does not hand over its stockpiles.