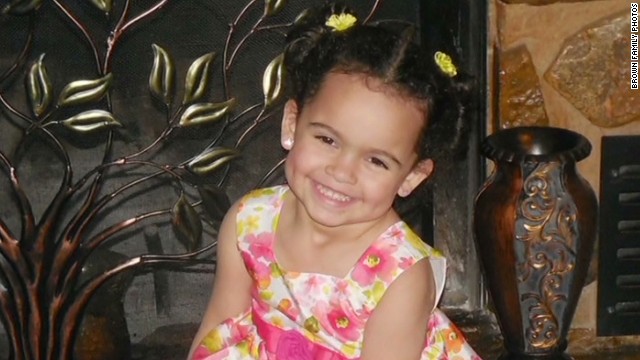 The 4-year-old girl at the center of a lengthy, high-profile custody dispute between her Native American father and her adoptive parents has been returned to the couple, a spokeswoman for the adoptive family said Monday.

Earlier in the day, the Oklahoma Supreme Court ruled Dusten Brown, the girl's father, must return the girl, named Veronica, to Matt and Melanie Capobianco, who live in South Carolina.

"Veronica is safely in the arms of her parents and has been reunited with her family. Our prayers are with everyone involved this evening. There is no happy ending in this travesty, only closure," said Jessica Munday, a spokeswoman for the family.

The Capobiancos adopted Veronica at birth in 2009 and have been involved in a custody battle since then with Brown, who lives in Oklahoma.

Brown's attorney, Clark Brewster, said his client handed Veronica over Monday night. He said the Browns were "devastated" but thought it best after the court's decision to hand Veronica over to the Capobiancos, with whom she spent the first two years of her life.

"One thing we wanted to avoid was some type of showdown, or sometime of event that would affect Veronica," Brewster said.

The four-year case has spanned state lines and tested an unusual federal law.

The Capobiancos legally adopted Veronica, and Brown learned of her adoption a few months later. Brown, a registered member of the Cherokee tribe, asserted his custody rights under the Indian Child Welfare Act, setting off the legal fight.

A family court judge ruled in Brown's favor in late 2011, and he took his daughter back. The Capobiancos had fought ever since to have Veronica returned.

In June, a divided U.S. Supreme Court sided with the Capobiancos. The justices said the adoption was proper and did not intrude on Brown's federal rights.

The father then took his case to Oklahoma courts. The Oklahoma Supreme Court issued an emergency stay last month to temporarily delay the transfer of Veronica to the Capobiancos.

Monday, it lifted the stay after the two sides couldn't come together on a custody agreement.