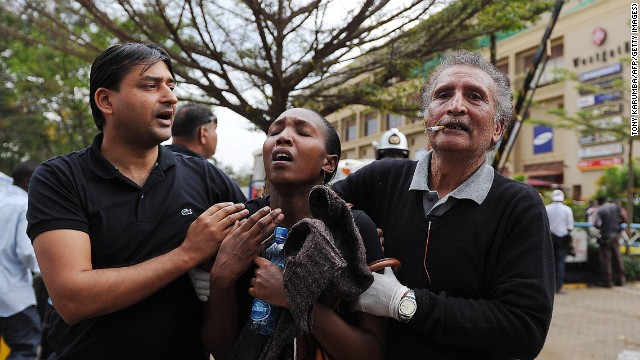 The death toll may yet rise. The Red Cross said 65 people remain unaccounted for, and Kenyatta said three floors of the mall had collapsed, trapping some bodies.

He did not explain the cause of the collapse, but fires and explosions had been noted at the upscale venue throughout parts of the last two days.

Attention now turns to investigating the siege, the bloodiest terrorist attack in Kenya since the 1998 bombing of the U.S. Embassy in Nairobi.

Kenyatta said forensic teams were working Tuesday at the mall to find out more about the attack and its perpetrators, believed to be members of the Somalia-based Al-Shabaab terror group.

U.S. law enforcement sources said they were scouring intelligence reports for evidence of a U.S. connection, but a senior U.S. official said Monday the claim was looking less solid as they continued to investigate.

The attackers include a woman killed early in the siege, a senior Kenyan government official told CNN. However, the official said, it is "impossible" based on the government's photo evidence (and before a forensics examination is complete) to determine if this woman is British-born Samantha Lewthwaite, as some have speculated.

Kenyatta promised "full accountability" for the "mindless destruction, deaths, pain, loss and suffering we have all undergone as a national family."
"These cowards will meet justice as will their accomplices and patrons wherever they are," he vowed, pledging to work with international allies in a global fight against terrorism.

Kenya is a key U.S. partner in battling Islamist terrorism and has also contributed military forces to an African Union expedition to fight Al-Shabaab forces in Somalia.

It was in retribution for that mission that Al-Shabaab claimed it was staging the Westgate attack.

Kenyatta's address came at tend of a two-day stretch during which Kenyan authorities frequently claimed control over the mall despite continued sporadic gunfire and explosions coming from it.

Tuesday morning, security forces said they were making final sweeps of the mall and dealing with explosives left behind by terrorists.

The harrowing episode began midday Saturday in Nairobi when some 10 to 15 gunmen stormed the mall, shooting indiscriminately, according to witness accounts.

Witnesses said the gunmen went from store to store, shooting people, and then took hostages.

Mwagi Dorcas told CNN's "New Day" on Tuesday that she hid behind luggage in the mall's ground-floor grocery store, memorizing a Muslim prayer sent to her by family in a desperate bid to save her life should attackers find her. Al-Shabaab and some witnesses have said the attackers quizzed shoppers about their faith before deciding whether to kill them, releasing Muslims and targeting many others.

"I was praying the whole time," she said. "I believed that, you know, if I got out, I would be rescued."

Some were spared despite not being Muslim. In one remarkable case reported by The Sun newspaper in Britain, terrorists spared a 4-year-old boy who confronted them, saying, "You're a very bad man."

ŌĆó Dutch national Elif Yavuz, a senior vaccines researcher for the Clinton Health Access Initiative based in Tanzania. Yavuz was pregnant and expecting her first child in October, said Julio Frenk, dean of faculty at the Harvard School of Public Health. "Elif was brilliant, dedicated, and deeply admired by her colleagues, who will miss her terribly," the Clinton family said in a statement.

ŌĆó Kofi Awoonor, a renowned African poet, author and Ghanian statesman. Awoonor earned his doctorate from New York's Stony Brook University and was a professor of literature there in the 1970s.

ŌĆó A nephew of Kenya's president along with the nephew's fiancee.

ŌĆó A Peruvian doctor, Juan Jesus Ortiz, who had previously worked for the U.N. Children's Fund and lived in Kenya doing consulting work.

ŌĆó Roula Adatia-Sood, who was seven months pregnant, a colleague at East FM Radio station, Seema Manji, told CNN. The radio station was hosting a children's cooking competition at the time of the attack.

In his speech Tuesday, Kenyatta praised Kenyans for turning out in overwhelming numbers to donate blood, for contributing money to victims and for helping in countless other ways.

He said their example proved to the world the attack was a failure despite the immense loss of life.

"The incident which we now put behind was certainly not welcome," he said. "Yet it has strengthened us and renewed our resolve to live as one strong, open, stable, democratic and prosperous republic where peoples of all races cultures and faiths pursue happiness together.