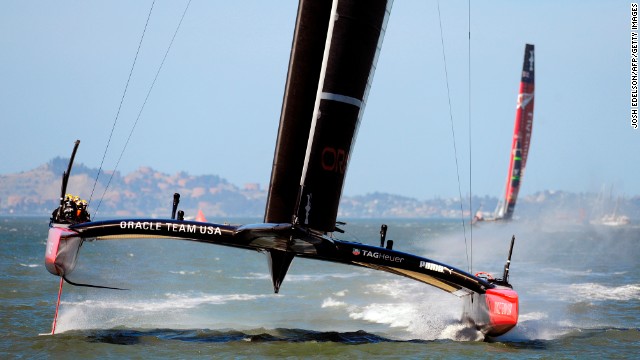 Oracle Team USA, which once trailed 8-1 in yachting's most prestigious competition, tied the series 8-8 Tuesday in San Francisco Bay to set up likely the most exciting finish in the 162-year history of the event.

On Wednesday, the U.S.-based team won by 44 seconds to claim the title.

Two victories for Oracle Team USA, bankrolled by billionaire Larry Ellison, were scratched off because it was deemed to have illegally tinkered with its boat prior to the finale.

Aaron Alexis, the man who went on the deadly shooting rampage at the Washington Navy Yard, was under the "delusional belief that he was being controlled or influenced by electro-magnetic waves," the FBI's Valerie Parlave said Wednesday.

Parlave, assistant director in charge of the FBI Washington Field Office, said Alexis acted alone and there was no evidence he was targeting particular people.

Alexis, who was 34, went on the rampage September 16, killing 12 people and wounded several others. Chilling video released Wednesday shows Alexis running through hallways with a sawed-off shotgun. He also gained access to and used a Beretta pistol during the shooting.

13-year-old Bella Lund thought she was on the field during a University of Wisconsin-Madison football game as part of the teamŌĆÖs tradition of honoring a military family of the game during home games.

What she didnŌĆÖt know was that her mom, Army Captain Jane Renee ŌĆ£J.R.ŌĆØ Lund, was returning home from a 6-month deployment in Afghanistan. Lund stood a few yards behind her daughter on the sidelines waiting to surprise her with a cheering crowd of more than 80,000 fans as an audience.

The reunion that followed is sure to warm any heart.

Check out the full video here:

A collection of some of Syria's most powerful rebel brigades have rejected a Western-backed opposition group that announced the creation of an interim government in exile this month.

The 13 rebel groups, led by the al Qaeda-linked al-Nusra Front, also called on supporters of the Syrian opposition to embrace Sharia law "and make it the sole source of legislation."

The move appeared to sideline the flagging National Syrian Coalition, which recently announced the formation of an interim government in exile led by Ahmad Tomeh, a dentist and dissident from the Syrian city of Deir Ezzor.

A Beijing man who snatched a baby from a pram and hurled it to its death in an argument over a parking space was Wednesday sentenced to death by a Beijing court, according to court documents.

Han Lei, 39, was charged with intentional homicide over the death of the two-year-old girl who died in hospital from brain damage 50 hours after being dashed to the pavement in the Daxing District of Beijing on July 23.

An earthquake in Pakistan, powerful enough to prompt the appearance of a small island off the coast, has killed at least 238 people, Pakistani officials said.

The 7.7-magnitude quake struck in a remote, sparsely populated area of southwestern Pakistan on Tuesday, but it had severe consequences.

In addition to the fatalities, around 400 people have been injured, he said. And more people are still feared to be trapped in wreckage.

The quake was strong enough to cause a mass 20 to 30 feet high to emerge from the Arabian Sea like a small mountain island off the coast of Gwadar, local police official Mozzam Jah said. A large number of people gathered to view the newly formed island, he said.

Vaccines protecting against influenza, hepatitis B and rabies are less effective for obese people. As scientists deŌĆtwitter.com/i/web/status/1ŌĆ”Sz
cnni

11:01 pm ET August 9, 2020 RETWEET
Super-rich families are buying multiple citizenships to prepare for the next lockdown. Here's how citizenship-by-inŌĆtwitter.com/i/web/status/1ŌĆ”IS
cnni

10:08 pm ET August 9, 2020 RETWEET
Scientists say they have, for the first time, found that dinosaurs suffered from osteosarcoma ŌĆö an aggressive maligtwitter.com/i/web/status/1ŌĆ”pIQL
cnni

10:01 pm ET August 9, 2020 RETWEET
A group of Canadian physicians has issued new guidelines saying that obesity should be defined by a person's healthŌĆtwitter.com/i/web/status/1ŌĆ”qN
cnni