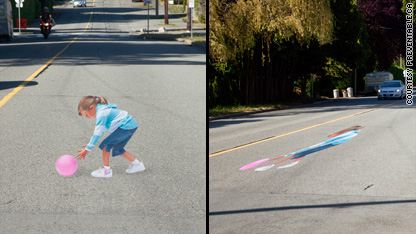 The 2D decal becomes a 3D illusion as drivers approach it.

What would happen if you saw a 3D illusion of a young girl chasing a ball across the street near a school?

A Canadian safety group hopes you'd slow down and think twice about speeding through a school zone. Critics of the image say it might scare drivers and lead to accidents.

Either way, she's got your attention, which is the point, said a spokesman for Preventable, a British Columbia-based safety awareness group behind the stunt.