Colton Harris-Moore, whom authorities have dubbed the Barefoot Bandit, pleaded guilty Friday to several federal charges stemming from actions that led to his dramatic July 2010 capture in the Bahamas.

Harris-Moore gained notoriety and earned his nickname for allegedly leading police on a two-year manhunt while eluding capture in stolen boats, cars and planes, often while barefoot.

Dressed in a khaki prison uniform at the hearing Friday, Harris-Moore pleaded guilty to seven counts, including stealing an airplane, piloting an airplane without a license, burglarizing a bank and possessing a firearm as a fugitive. He faces additional charges in Washington state. 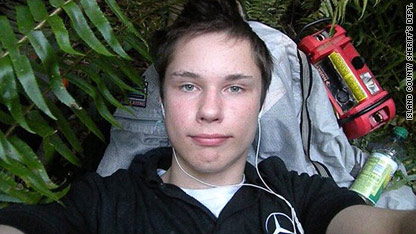 Colton Harris-Moore was sought in a string of home and airport break-ins in various U.S. locations.

Accused "barefoot bandit" Colton Harris-Moore was indicted Wednesday by a federal grand jury in connection with thefts in the Pacific Northwest over two years, federal prosecutors in Washington said.

The 19-year-old gained notoriety for allegedly stealing planes and flying without a pilot's certificate, and sometimes without shoes. His time on the run ended on July 11 when he was captured in the Bahamas after flying 1,000 miles in a stolen plane from Indiana, authorities said.

He is scheduled to be arraigned on the indictment on Nov. 18.

Gulf oil spill capped ... so far - For the first time in nearly three months, oil has stopped flowing into the Gulf of Mexico as BP proceeds with a highly anticipated test designed to measure pressure within its ruptured oil well.

The move is being lauded as a positive step, accompanied by a strong note of caution that the cutoff is simply part of the test, as BP and government experts assess how the well is holding up. The test got under way Thursday after two days of delays, first as government scientists scrutinized testing procedures and then as BP replaced a leaking piece of equipment known as a choke line.

iPhone 4 - After a decade of hit products that made Apple the cutting-edge darling of the mobile and computing world, the rollout of the iPhone 4 has been an atypical and ugly scratch on the company's glowing image. On Friday, Steve Jobs and his Cupertino, California-based company hope to set things right at a news conference expected to address the drumbeat of complaints, and bad press, about the iPhone 4's antenna. What is said at that event, analysts say, will go a long way toward determining whether the tailspin ends now or continues for weeks or maybe months.

END_OF_DOCUMENT_TOKEN_TO_BE_REPLACED

The so-called "barefoot bandit," Colton Harris-Moore, pleaded guilty in
a Bahamian court Tuesday to a charge of illegally landing a plane, and was sentenced to three months in jail or a $300 fine, police said.

[Posted at 11:43 a.m.] A teenage fugitive known as the "barefoot bandit" was set to be
arraigned Tuesday before the Bahamas chief magistrate on a variety of charges, authorities said.

Harris-Moore is set to appear at 12 p.m. ET before Chief Magistrate Roger Gomez. At that hearing, the charges against him will be read, Skippings said.

Harris-Moore was taken into custody on Harbour Island in the Bahamas
early Sunday. He is sought in a string of home and airport break-ins along with thefts of vehicles. He faces charges in Washington state in the theft of an aircraft, and police have said they believe he stole a plane in Indiana and flew it to the Bahamas, where it was found off Abaco Island.

The teen has been on the run since he escaped from a juvenile halfway house in Renton, Washington, in 2008. The FBI had offered a $10,000 reward for information leading to his arrest.

"At this point, we're not aware of any requests from the U.S. government or any government for extradition of the young man," said Quincy Parker, spokesman for the Bahamas embassy in Washington. Such a request must be made, he said. "That's how it works. It's not a matter of police force to police force."

Gulf oil disaster - BP plans to begin testing the new cap on its ruptured deepwater well Tuesday - a move that officials hope will be a step on the way to stopping oil from gushing into the Gulf of Mexico. The process could take anywhere from six hours to two days, or longer if BP extends it.

Officials say several scenarios are possible:  The cap could contain all the oil; the cap could contain some of the crude while ships on the water's surface collect the rest; or, under a worst-case scenario, there could be more damage to the well's casing, meaning that capping the well would not stop the oil from flowing.

END_OF_DOCUMENT_TOKEN_TO_BE_REPLACED

The Barefoot Bandit has more than 80,000 Facebook fans who see him as a folk hero, a modern-day Jesse James. But police say Colton Harris-Moore is a brazen 19-year-old criminal, pure and simple.

The beginning and end of Harris-Moore's two-year run as a wanted fugitive is the stuff of Hollywood. Indeed, one studio has optioned his story. But police and some of his victims don't think he should be glamorized as he makes his first court appearance Tuesday.

"They can never imprison a mind like yours Colton," wrote one admirer on Harris-Moore's Facebook fan page Monday, a day after he was captured during a high-speed boat chase in the Bahamas.

END_OF_DOCUMENT_TOKEN_TO_BE_REPLACED

After eluding authorities for years from Washington state to Indiana, a notorious teenage fugitive called the "barefoot bandit" was arrested Sunday following a high-speed boat chase in the Bahamas, police said.