Authorities in Australia have arrested a man they say conspired with a convicted international arms dealer known as the "Merchant of Death."

Richard Ammar Chichakli, a U.S. and Syrian citizen, was arrested Wednesday by Australian authorities at the request of the United States, the U.S. Drug Enforcement Administration said Thursday.

'Merchant of death' trial to open in New York

After evading international authorities for nearly two decades, alleged international arms and drug smuggler Viktor Bout, widely dubbed the "merchant of death" by his accusers, will go on trial in New York Tuesday.

The Russian businessman is charged with a wide range of counts, including conspiracy to kill Americans, attempting to sell arms to undercover federal agents, wire fraud and violating U.N. Security Council sanctions. Bout pleaded not guilty to all charges last year.

"I'm very confident that the trial will make it transparent that Viktor Bout did not intend to sell arms to anyone," Bout's lawyer, Albert Y. Dayan, said during pretrial hearings.

International security experts say that the charges encompass only a small fraction of what they believe Bout is responsible for.

To pat or not to pat? - Amidst a flurry of complaints from passengers who said they'd been inappropriately touched while airport security screeners patted them down, the chief of the Transportation Security Administration is expected to  defend the method Wednesday. John Pistole will testify before the Senate Committee on Commerce, Science and Transportation. His appearance was scheduled before this week's "Don't touch my junk" controversy, during which a passenger videotaped his pat-down experience. Two pilots who refused full body scans and pat-downs are suing the Department of Homeland Security. Former commercial pilot C.B. "Sully" Sullenberger, who famously landed a plane in the Hudson River, says pat-downs for flight crews aren't "an efficient use of our resources." The organization suing TSA on behalf of the pilots said the agency is "forcing travelers to consent to a virtual strip search."

Movie publicist killed - Hollywood is reeling after a well-known publicist was gunned down in Los Angeles, California, early Tuesday after a party celebrating the new Cher/Christina Aguilera movie, "Burlesque."  Ronnie Chasen, 64, died after "multiple shots" were fired into her Mercedes, seconds after she drove past the Beverly Hills Hotel on Sunset Boulevard, police said. Chasen crashed the car into a light pole at 12:20 a.m. She died later at Cedars-Sinai Hospital.

"We were all on such a high," songwriter Diane Warren said. "And then she left - I'm guessing about 10 minutes before I did. What on earth? What happened? Why?"

END_OF_DOCUMENT_TOKEN_TO_BE_REPLACED 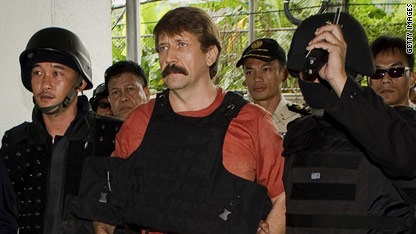 Alleged international arms dealer Viktor Bout, inspiration for a lead character in the film "Lord of War" starring Nicolas Cage, was extradited to the United States on terrorism charges Tuesday. The mustachioed Russian arrived in New York on a U.S. chartered jet from Thailand.

Bout had been held in a Thai jail since March 2008 when he was arrested in a sting operation conducted by the U.S. Drug Enforcement Agency. Agents posed as members of Colombia's rebel group FARC.

Bout is accused of supplying weapons to war zones from Sierra Leone to Afghanistan. He says  he's innocent.

The Russian government is upset about the extradition and has called the move "illegal." Russian officials blamed the United States for exacting "unprecedented political pressure" on Thai courts.

Bout has rarely given interviews, though one example stands out which was published in 2003 in the New York Times. Journalists Douglas Farah and Stephen Braun wrote a book about Bout. In August, Farah wrote in Foreign Policy about why Bout may not stand trial.