An "out of control" fire has broken out in Cape Town's Table Mountain National Park, prompting evacuations, accordiŌĆtwitter.com/i/web/status/1ŌĆ”rL 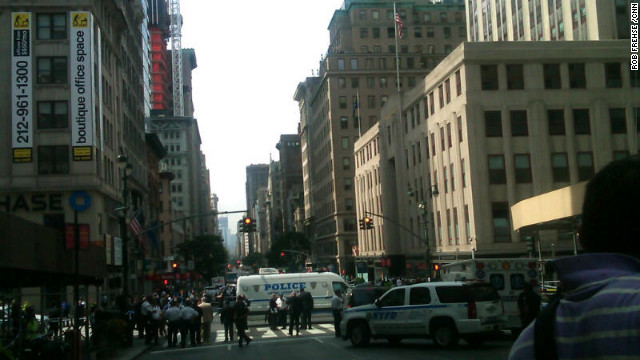 Read the full story and developments in the investigation on CNN.com. For local coverage, visit WPIX, WCBS and NY1.
Scroll down to catch up on the events as they unfolded.

[Updated at 3:19 p.m. ET] Two patients who were brought to New York-Presbyterian Hospital Friday have been discharged and one has been admitted, the hospital's public affairs office said in a statement.

The three people were brought to New York-Presbyterian Hospital/Weill Cornell Medical Center Emergency Department as a result of a shooting outside the Empire State building shortly after 9 a.m., the hospital said.

Other victims were brought to Bellevue Hospital after the shooting, which police said left eight wounded and two dead, including the gunman.

Police initially said nine bystanders were wounded in an exchange of gunfire between shooter Jeffrey Johnson and police. That number was later revised to eight.

Pictures from the scene

Police killed Johnson as he pulled a gun on them while trying to flee the scene where he fatally shot a former coworker, Police Commissioner Ray Kelly said.

END_OF_DOCUMENT_TOKEN_TO_BE_REPLACED

What to know about the Empire State Building

New York police said they shot and killed the gunman.

Authorities converged on the building about 9 a.m. after reports of gunfire.

The Empire State Building is one of the most famous skyscrapers in the world and one of New York's best-known tourist attractions.

Each year, about 4 million people visit the building's two observation decks. At more than 1,453 feet tall, the landmark building reaches more than a quarter-mile into the sky.

"There's always a focus and concentration on the building," said retired police officer Lou Palumbo. "That building gets special attention."

Learn more about the Empire State Building below.

END_OF_DOCUMENT_TOKEN_TO_BE_REPLACED

Our conversation about police, protest and the media while we cover the killing of #DaunteWright and #GeorgeFloyd twitter.com/reliablesourceŌĆ”
sarasidnerCNN

10:27 pm ET April 18, 2021 RETWEET
@atompkins You give me too much credit. But I thank you for everything you do for journalism.
sarasidnerCNN