Greece's cabinet voted Wednesday to support Prime Minister George Papandreou's call for a referendum as soon as possible on the latest bailout plan, as Europe's stock markets watched anxiously to see what might happen next.

The vote was unanimous, though some of the ministers expressed criticism prior to casting their votes, CNN affiliate Mega Channel reported.

The cabinet vote came hours before German Chancellor Angela Merkel, French President Nicolas Sarkozy and senior figures from the International Monetary Fund and European Union were to meet Wednesday with Greek officials at an emergency meeting in Cannes, France, ahead of the G-20 summit.

Speaking in his hometown of Seoul, South Korea, ﻿U.N. Secretary-General Ban Ki-moon called on nations to not forget about the real reasons why they have gathered in the Korean capital.

With trade and currency imbalances expected to top the, the former South Korean foreign minister insists that rich, developed nations must "keep their promise" to the developing world.

"While I'm concerned that opinion is divided among some G-20 leaders, this is the moment for unity and co-ordination to come together and help the developing nations and poor people," he told CNN.

The 66-year-old U.N. boss is a strong advocate of the Millennium Development Goals aimed at reducing world poverty and hunger by 2015. Many have questioned how the goals focused on women and children and require a commitment of $40 billion can actually be achieved, especially in light of the global economic downturn. 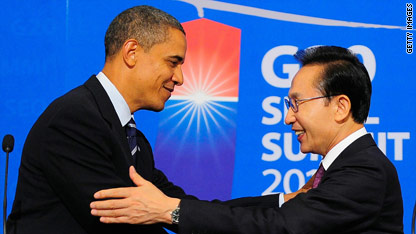 A fierce debate over currency manipulation may be unfolding behind closed doors at the G-20 Summit in South Korea. Leaders from the nations with the 20 largest economies around the world are meeting in Seoul to discuss how to stabilize and grow the world's economy.

The United States is pressuring China to revalue the yuan at a higher rate relative to the US dollar. The U.S. believes China takes steps to set the value of the yuan artificially low, giving Chinese exports a competitive advantage.

CNN's Steve Kastenbaum takes a look at how currency manipulation affects the U.S. economy and how a change in the yuan's value could help and hurt Americans. 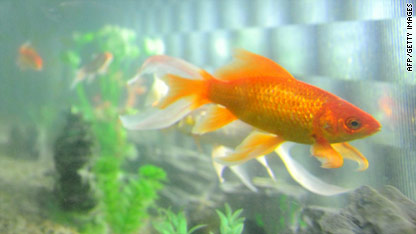 A goldfish stands guard this week in a tank at the G-20 summit in Seoul, South Korea.

Security officials at the Group of 20 summit in Seoul, South Korea, have deployed 50,000 police and soldiers, plus an elite water security unit: six goldfish.

Security officials placed six goldfish inside a tank supplying toilet water to the conference, the Mirror of London, England, reported. The officials will watch the fish for signs of illness or poisoning in an effort to protect the conferees, according to the Mirror.

An animal rights group is up in arms over the use of the finned defenders.

"There are a variety of modern scientific methods that would better protect world leaders and keep fish from enduring agonizing deaths from contaminated water," Tracy Reiman, executive vice president for the People for the Ethical Treatment of Animals, wrote in a letter to conference organizers.

"After all, the fish cannot tell you specifically what might be wrong with the water," she added.

American and South Korean negotiators failed to reach agreement on a new trade pact during President Barack Obama's visit to Seoul, creating new delays and obstacles for an accord that the White House has said could translate to an additional $10 billion in U.S. exports and 70,000 American jobs.

A long-running dispute over U.S. access to Korea's auto and beef markets was largely responsible for the failure, according to the White House.

Obama tried to put a positive spin on the setback during a joint news conference with South Korean President Lee Myung-bak.

"We have asked our teams to work tirelessly in the coming days and weeks to get this completed, and we are confident that we will do so," he said.

Reaching a deal "could be a win for the overall economic partnership between our two countries by bringing us closer together, allowing us to benefit from each other's innovations, and ensuring strong protections for workers' rights and the environment."

﻿﻿A look at highlights from the day's business news:

U.S. stocks made a comeback Wednesday afternoon to finish higher, as the dollar turned lower after an earlier rally. But the gains were tepid as investors remained jittery ahead of the G-20 meeting.