A British man left paralyzed by a catastrophic stroke seven years ago lost his High Court battle Thursday to gain a legal right to end his life when he chooses.

Tony Nicklinson's condition means it is impossible for him to take his own life - and he wants the legal right to have a doctor take his life without fear of prosecution.

But while expressing sympathy for his situation, the High Court ruled that such a significant change to the law - involving overturning the ban on voluntary euthanasia - would have to be decided by lawmakers.

The judges also rejected a similar challenge to the law brought by a second man suffering locked-in syndrome, named only as Martin.

"The Court recognised that the cases raise profoundly difficult ethical, social and legal issues, but it judged that any change to the law must be a matter for Parliament to decide," a statement from the court said.

The ruling upset Nicklinson, who cried as his wife, Jane, told the waiting media that the family was "bitterly disappointed" and would file an appeal.

In the meantime, her husband will have to continue living as he is, or starve himself to death, she said.

Assisted-suicide machine among items up for sale in Kevorkian auction

The machine used by the late Dr. Jack Kevorkian in more than 100 assisted suicides will be among the items up for sale later this month, the auctioneer and his estate announced.

The Michigan pathologist helped spur an international ethics debate by helping suffering patients die and pushing for this practice to be legalized. His conviction in one such case landed him in prison for eight years. He died in early June at Beaumont Hospital in Royal Oak, Michigan, at the age of 83.

Besides the noted Thanatron machine, which Kevorkian built, other items to be auctioned include some of Kevorkian's correspondences and invention ideas, a pearl flute, his doctor's bag, a master lock from prison and his signature blue sweater. People can also purchase provocative paintings that he created, which come with brief descriptions from the artist himself.

A portion of the auction proceeds will go toward the charity Kids Kicking Cancer at the request of the attorney for Kevorkian's estate and the late doctor's niece and sole living heir. 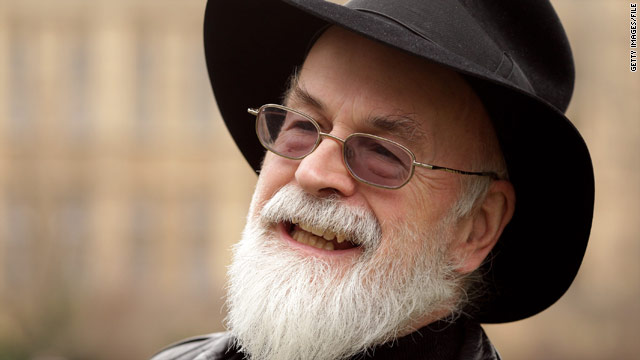 In the documentary Sir Terry Pratchett witnesses the death of a man who chose to die by assisted suicide.
June 15th, 2011
06:33 PM ET

A documentary about fantasy writer Sir Terry Pratchett's quest to examine whether assisted suicide is the right decision for him as he battles Alzheimer's has sparked widespread debate online about the controversial issue and how it was portrayed.

The documentary, called "Terry Pratchett: Choosing to Die" has been described as "harrowing," "disgraceful" "powerful," a romanticizing of a "conveyor belt towards death," "heartbreaking" and a "slippery moral slope."

The words, of course, depend on what side of the issue you fall. Still, by most accounts, the documentary aired by the BBC  in the U.K. was raw, real and intense.

And so are the reactions to it - particularly regarding a scene towards the end of the film in which hotel owner and millionaire Peter Smedley, who suffers from motor neuron disease, ends his own life.

The film shows Smedley, after consulting with his family, making the decision that he will end his life. In a blue house in Switzerland, with his wife by his side and the help of the Swiss group Dignitas, he says his final goodbyes, drinks two drug concoctions, and quickly goes into a deep sleep, snoring, before he stops breathing.

Most who watched the show knew they were going to see a man die - it had been publicized.

"No one was going to be tuning in expecting a barrel of laughs," Metro U.K. staffer Keith Watson wrote. "We were about to watch a man die."

It is not the first time a documentary on assisted suicide showed someone being helped to take their own life. Sky, in the U.K. and HBO in the U.S. have aired or currently are airing similar documentaries. But the BBC documentary, whether because it features a prominent person in Pratchett, or because of its raw tone, has hit a nerve for many people.
The documentary's director, who traveled with Pratchett and has been documenting his journey, said he knew the topic was going to be controversial.

"We knew that if we wanted this film to be entirely honest about assisted dying then it was important to show the whole process, including the death itself," director Charlie Russell wrote in a blog on the BBC website.

"When Peter, the man who dies on-camera in the film, agreed to let us record his end, the challenge was to film it respectfully, sensitively, but most of all truthfully."