A House of Representatives committee has voted 9-1 to recommend that Rep. Charlie Rangel, D-New York, be censured by the House and be required to pay restitution for any unpaid taxes.

The chief counsel of the House ethics committee concluded Thursday that Rep. Charlie Rangel, D-New York, should be censured by the House of Representatives in response to multiple rules violations committed by the 20-term congressman.

"Disciplinary action in this matter is necessary," R. Blake Chisam said. "This is about the institution (of the House) and the ultimate test for the
institution is whether members behave creditably."

Rangel, who was found guilty of the violations on Tuesday, pleaded for "a drop of fairness and mercy" in part out of recognition of his lengthy public
record.

Miners in America - The men who survived 69 days in a Chilean mine are in Atlanta, Georgia, on their first U.S. tour since being rescued last month. The miners are on their way to Los Angeles, California, to tape "CNN Heroes: An All Star Tribute," which will air on Thanksgiving.

"I want to see the world," said 27-year-old miner Richard Villarroell, who has only been to Argentina. "I know all of Chile, but not the rest of the world."

CNN Heroes brings attention to regular people around the globe who are doing significant things that improve lives. The Chileans were invited because they symbolize the resiliency and endurance of the human spirit.

Rangel punished, Murkowski claims win - Politics is making news Thursday from New York to Alaska. New York Rep. Charles Rangel will be punished by his colleagues for violating House rules. The House ethics committee meets today and could recommend anything from a fine to expulsion. In Alaska, Sen. Lisa Murkowski has finally declared victory over fellow-Republican Joe Miller. The votes are still being counted. Murkowski would be the first write-in candidate to win a Senate race since Strom Thurmond in 1954.

Mystery bone - Investigators hope to determine Thursday whether a jawbone found on an Aruba beach belongs to an animal or a human. It's possible that the bone is from the body of Natalee Holloway, the missing American teenager. If the bone is human, authorities will attempt to find out using a DNA match whether it belongs to Holloway, who was last seen on the island in 2005. The Netherlands Forensic Institute in The Hague is examining the bone. Joran van der Sloot, the suspect in the Holloway case, is being held in Castro-Castro prison in Peru on another murder charge. Holloway's mother met with him recently. 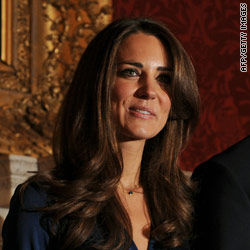 When a photo of the pair on a Swiss ski vacation emerged in 2004, Middleton began a life in the spotlight. END_OF_DOCUMENT_TOKEN_TO_BE_REPLACED

Rangel: 'How can anyone have confidence' in ethics vote?

Democratic Rep. Charlie Rangel issued the follow statement after he was found guilty by an ethics subcommittee Tuesday on multiple violations of House rules.

"How can anyone have confidence in the decision of the Ethics Subcommittee when I was deprived of due process rights, right to counsel and was not even in the room? I can only hope that the full Committee will treat me more fairly, and take into account my entire 40 years of service to the Congress before making any decisions on sanctions.

I am disappointed by the unfortunate findings of the Ethics Subcommittee. The Committee's actions are unprecedented in view of the fact that they arrived at without rebuttal or counter evidence on my behalf.

While I am required to accept the findings of the Ethics Committee, I am compelled to state again the unfairness of its continuation without affording me the opportunity to obtain legal counsel as guaranteed under the U.S. Constitution.

END_OF_DOCUMENT_TOKEN_TO_BE_REPLACED

The subcommittee, according to California Democratic Rep. Zoe Lofgren, the ethics committee chairwoman, found "clear and convincing" evidence of guilt on 11 of 12 counts, including failing to pay taxes on a home in the Dominican Republic, misuse of a rent-controlled apartment for political purposes and improper use of government mail service and letterhead.

The veteran New York congressman was cleared of a charge relating to an alleged violation of the House gift ban.

Rangel walks out of ethics hearing

Embattled Rep. Charlie Rangel, D-New York, walked out of his House ethics subcommittee hearing Monday, complaining that he has not had sufficient time to hire a new legal team to respond to corruption
allegations.

The subcommittee rejected Rangel's request to delay the hearing until a new defense team is assembled.

Rangel faces 13 allegations, include failing to pay taxes on a home in the Dominican Republic, misuse of a rent-controlled apartment for political purposes and improper use of government mail service and letterhead.

[Updatedat 10:31 a.m.] California Rep. Zoe Lofgren, the chairwoman of the House ethics committee, said Monday the subcommittee reviewing allegations against New York Rep. Charlie Rangel will not grant his request for a delay in order to raise funds for a new legal team.

[Posted at 9:49 a.m.] Rep. Charlie Rangel walked out of his ethics committee hearing Monday morning, complaining that he has not had sufficient time to hire a legal team.

The committee then continued meeting behind closed doors. 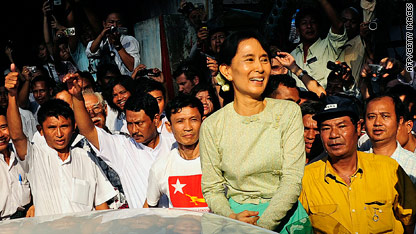 Aung San Suu Kyi has spent much of the last two decades under house arrest.

Still open for dialogue - Freed activist Aung San Suu Kyi said she would continue working on matters of democracy and human rights in Myanmar and doesn’t worry about being detained again.

The 1991 Nobel Peace Prize recipient has spent 15 of the past 21 years under house arrest for her dogged opposition to authoritarian rule in Myanmar. She insists all parties  - both inside and outside of the country - must continue working together.