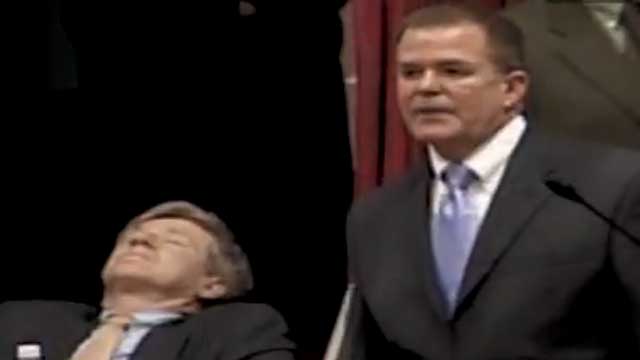 In light of Vice President Joe Biden's recent napping episode caught on cam here, we thought we'd dig up some of our best naptime videos featuring your favorite sleepy politicians.

Napping greatest hitsÂ – Our very own Jeanne Moos highlights political napping that goes back to the Reagan administration, when the president nodded off in front of Pope John Paul II, and Dick Cheney taking a snooze at a briefing.

END_OF_DOCUMENT_TOKEN_TO_BE_REPLACED

A tour bus was stuck on a cliff, with the driver and a passenger suspected still trapped inside, according to the Coast Guard Administration of Taiwan. It was not immediately clear whether they were injured or dead.Â Another tour bus, with 19 people aboard, was missing.

Soldiers were deployed to rescue those trapped, including about 200 visitors from China, said Cai Min, a spokesman for Taiwan's National Disaster Prevention and Protection Commission. More than two dozen travelers had been rescued by Friday afternoon, officials said.

Megi, which killed at least 11 people in the Philippines, is expected to reach southern China early Saturday, according to the Hong Kong Observatory.

END_OF_DOCUMENT_TOKEN_TO_BE_REPLACED

Former Vice President Dick Cheney has been admitted to a hospital in
Washington after reporting he wasn't feeling well.

A spokesman said he saw his doctors Friday afternoon at George Washington University, and upon their advice, was admitted for further tests.

Spokesman Peter Long says Cheney is expected to remain in the hospital
over the weekend.

Cheney has a history of heart trouble, but the cause of his visit was not disclosed.