A 21-year-old Russian soldier is sentenced to life for killing an unarmed man in Ukraine's first war crimes trial s‚Ätwitter.com/i/web/status/1‚Ä¶xo

Gulf oil spill capped ... so far - For the first time in nearly three months, oil has stopped flowing into the Gulf of Mexico as BP proceeds with a highly anticipated test designed to measure pressure within its ruptured oil well.

The move is being lauded as a positive step, accompanied by a strong note of caution that the cutoff is simply part of the test, as BP and government experts assess how the well is holding up. The test got under way Thursday after two days of delays, first as government scientists scrutinized testing procedures and then as BP replaced a leaking piece of equipment known as a choke line.

iPhone 4 - After a decade of hit products that made Apple the cutting-edge darling of the mobile and computing world, the rollout of the iPhone 4 has been an atypical and ugly scratch on the company's glowing image. On Friday, Steve Jobs and his Cupertino, California-based company hope to set things right at¬Ýa news conference expected to address the drumbeat of complaints, and bad press, about the iPhone 4's antenna. What is said at that event, analysts say, will go a long way toward determining whether the tailspin ends now or continues for weeks¬Ýor maybe months.

END_OF_DOCUMENT_TOKEN_TO_BE_REPLACED

Gulf oil disaster - A massive, silver-colored blimp is expected to arrive on the Gulf Coast on Tuesday to aid in oil disaster response efforts. The U.S. Navy airship will be used to detect oil, direct skimming ships and look for wildlife that may be threatened by oil, the Coast Guard said Monday. The 178-foot-long blimp, known as the MZ-3A, can carry a crew of up to 10.

The blimp hopefully will give authorities the chance to get a better idea of where the oil is and how far-reaching the impact is. On Monday, Texas authorities said they traced a small number of tar balls found near Galveston to the Deepwater Horizon oil spill. The tar balls collected from beaches in Galveston County over the weekend could fit in a 5-gallon bucket.¬ÝThey have been confirmed to have originated from the ruptured BP well off Louisiana, said Jim Suydan of the Texas General Land Office.

Heat wave - A heat wave of historic proportions could strike some Northeastern states as forecasters warn of prolonged triple-digit temperatures that could trigger "a dangerous situation," the National Weather Service advised Monday.

END_OF_DOCUMENT_TOKEN_TO_BE_REPLACED

[Posted at 1:31 p.m.] President Barack Obama told the people of West Virginia that the entire United States shares in their loss with the death of Sen. Robert Byrd.

"He was a Senate icon," Obama said. "And he was my friend. That's how I'll remember him. Today we remember the path he climbed to such extraordinary peaks."

"Giving you hope, he said, was his greatest achievement," Obama said. "Hope through roads and research centers, schools..."

Obama spoke of Byrd's knowing that life was marked with your weaknesses and strengths, sins and truths and successes and failures.

Biden said it couldn't have been more fitting for Byrd to lie in repose inside the Senate chambers, instead of in the rotunda.

"That was his cathedral," Biden said.

Biden remembered Byrd as the "fiercest" defender of his state and the people's way of life and a man who he never called "Senator," but instead "Leader."

END_OF_DOCUMENT_TOKEN_TO_BE_REPLACED 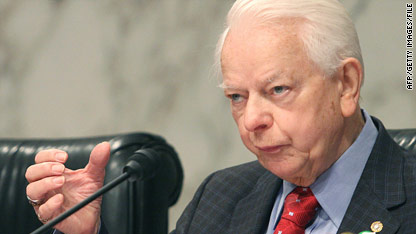 Sen. Robert Byrd passed away at the age of 92.

Robert Byrd dies - West Virginia Sen. Robert Byrd, the self-educated son of a coal miner who became the longest-serving member of Congress, died early Monday at age 92, the senator's office said. Byrd, a nine-term Democrat, was known as a master of the chamber's often-arcane rules and as the self-proclaimed "champion of the Constitution," a jealous guardian of congressional power.

As news of Byrd's passing echoes through Washington, and as his family plans his funeral, colleagues are remembering Byrd for his humble nature, fighting spirit and determination.

Senator Byrd: 'I love the Senate'

END_OF_DOCUMENT_TOKEN_TO_BE_REPLACED

[Updated at 10:13 a.m.] Colleagues of Sen. Robert Byrd of West Virginia mourned his death as family and friends planned his funeral. Byrd, the longest-serving member of the U.S. Congress, died Monday at the age of 92.

Under West Virginia law, the state's popular two-term Democratic governor, Joe Manchin, has the power to appoint Byrd's successor. Manchin is expected to name a fellow member of his party to succeed Byrd, who was also a Democrat, thereby keeping a total of 59 Democrats in the Senate. There are questions, however, regarding exactly how long Byrd's appointed successor can serve before another election is held. West Virginia law says that if a Senate vacancy is created within two and a half years of the end of a term, the appointed successor will automatically serve out the remainder of the term. If not, a special election is required.Byrd's current term is scheduled to end on January 3, 2013. The two and a half year mark will be reached on Saturday, July 3.

West Virginia law fails, however, to state exactly when a vacancy occurs. Whether the vacancy is considered to have been created at the moment of Byrd's death, when the Senate informs state officials of the vacancy, or when Manchin declares the seat vacant will be crucial. West Virginia - a traditional Democratic stronghold - has been increasingly competitive for the Republicans. John McCain easily defeated Barack Obama in West Virginia in the 2008 presidential election. Neither Manchin nor the Democratic-led Senate have made any official declarations yet.

As question swirl around the timing of the next election for Byrd's seat, numerous political leaders have been issuing statements in remembrance of the nine-term senator:

"Sen. Byrd was a fearless fighter for the constitution, his beloved state and its great people. He made a significant mark as a member of Congress in both our state's and nation's history. His accomplishments and contributions will define history for eternity."

END_OF_DOCUMENT_TOKEN_TO_BE_REPLACED

Manchester City manager Pep Guardiola described his players as "legends" after they completed one of the most memor‚Ätwitter.com/i/web/status/1‚Ä¶Jd
cnni

7:00 am ET May 23, 2022 RETWEET
A couple was attacked by a bear inside their northern Wisconsin home after the animal broke through their window, a‚Ätwitter.com/i/web/status/1‚Ä¶OA
cnni

6:45 am ET May 23, 2022 RETWEET
The International Monetary Fund said the global economy faces "perhaps its biggest test since the Second World War,‚Ätwitter.com/i/web/status/1‚Ä¶SK
cnni

Manchester City manager Pep Guardiola described his players as "legends" after they completed one of the most memor‚Ätwitter.com/i/web/status/1‚Ä¶Jd
cnni

7:00 am ET May 23, 2022 RETWEET
A couple was attacked by a bear inside their northern Wisconsin home after the animal broke through their window, a‚Ätwitter.com/i/web/status/1‚Ä¶OA
cnni

6:45 am ET May 23, 2022 RETWEET
The International Monetary Fund said the global economy faces "perhaps its biggest test since the Second World War,‚Ätwitter.com/i/web/status/1‚Ä¶SK
cnni

7:02 am ET May 23, 2022 RETWEET
A 21-year-old Russian soldier is sentenced to life for killing an unarmed man in Ukraine's first war crimes trial s‚Ätwitter.com/i/web/status/1‚Ä¶xo
cnnbrk

4:49 am ET May 23, 2022 RETWEET
Tiger Woods withdraws from the PGA Championship after shooting his worst-ever score in the tournament‚Ätwitter.com/i/web/status/1‚Ä¶U1
cnnbrk