Overheard on CNN.com: Will GOP voters accept Romney? Does it matter?

Mitt Romney came out ahead on Super Tuesday, but plenty of Republicans voted for Rick Santorum instead, and Georgia went for Newt Gingrich by a decisive margin. The morning after, readers are exploring two questions. First, why haven't GOP voters fully embraced Romney? Second, does this apparent conflict actually mean anything in the long run?

One reader offered this theory:

chadpv: "Republicans' main focus is who can beat Obama in November. That's what is driving votes. But Republicans are not confident that Romney (or any candidate in the run) can beat Obama; they just think if someone can squeeze a win, it will be Romney. That is why he cannot really 'seal the deal' as fast as most Republican primaries. That is also why the field is very weak, Anyone who has wide appeal with the Republicans will wait four more years when there is not an incumbent running and their chances are better to win."

Doucher: "And this is one of many problems with the two-party system; they want to beat each other more than they want to give us a good candidate."

Another person said Romney doesn't need to worry too much.

GoPSULions: "The ultra conservatives that are not now voting for Romney will vote for whoever wins the nomination rather than vote for Obama. So this is why Romney is not concerned about their votes in the primaries. He is focused on staying more to the middle so he can potentially win the swing states and voters that are not locked to voting straight party lines." 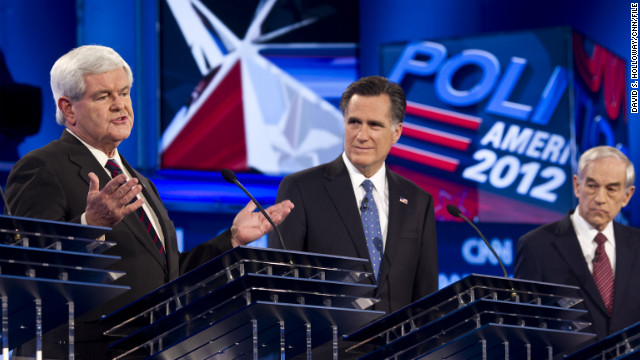 Quite a debate was had on Thursday night ahead of the Florida GOP primary. Candidates sparred over a variety of issues, and the conversation was spirited both on stage and in our comments section.

On Romney's apparent air of dominance: Romney beats Gingrich at his own game

We saw our readers giving more praise for Mitt Romney after this debate than we have seen after other such events.

Phange: "Romney very clearly did what needed to be done yesterday. Not only did he make Newt look disheveled and decisively off-kilter, he presented himself as pragmatic and intellectual. With this being the last debate before the Florida primary, I think it's highly unlikely that Newt can recover in time to win the state."

sdpianomom: "One of my favorite moments; Romney praises his wife for her strength in battling cancer and MS. Then there's Gingrich, standing next to him, who cheated on his wives while they were battling those very same diseases."

Not everyone was buying what Romney was saying. END_OF_DOCUMENT_TOKEN_TO_BE_REPLACED