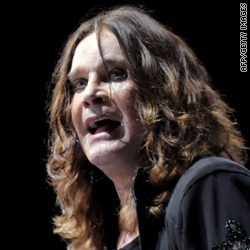 The British heavy metal icon and former Black Sabbath frontman had a good reason for having his full genome sequenced and analyzed: He wanted to know why he was still alive.

â€śI was curious,â€ť he wrote in a column this week for Londonâ€™s The Sunday Times. "Given the swimming pools of booze I've guzzled over the yearsâ€”not to mention all of the cocaine, morphine, sleeping pills, cough syrup, LSD, Rohypnol â€¦ you name it - there's really no plausible medical reason why I should still be alive. Maybe my DNA could say why."

The St. Louis, Missouri-based Cofactor Genomics sequenced his genome and Knome Inc. analyzed the data, putting the Prince of Darkness in the same company as DNA co-discoverer James Watson and Harvard University professor Henry Louis Gates, who also have submitted to the process, Scientific American reported.

â€śDespite the completion of the generalized human genome draft a decade ago, connections between diseases and genetic variations have proved to be evermore complex and elusive,â€ť it said.

Knome co-founder Jorge Conde said Osbourne was interested in his ancestry and in recently being diagnosed with a Parkinsonâ€™s-like condition. The test revealed some Neanderthal lineage as well as â€śnovel variantsâ€ť in genes associated with addiction and metabolism.

The company didnâ€™t divulge the full results of Osbourneâ€™s test. The rocker and his wife, Sharon, are appearing at TEDMED 2010 in San Diego, California, on Friday to discuss the results. His speech is titled, â€śWhat will the unveiling of a full Osbourne genome reveal?â€ť

A Halloween treat, no doubt.

END_OF_DOCUMENT_TOKEN_TO_BE_REPLACED

2:00 pm ET May 18, 2022 RETWEET
Pollution caused one in six deaths worldwide in 2019, a new study has revealed â€“ more than the annual global tollstwitter.com/i/web/status/1â€¦9aRi
CNNweather

7:38 am ET May 18, 2022 RETWEET
Australia has seen an increase in extreme weather due to climate change, so it is no surprise that it is a key issuâ€twitter.com/i/web/status/1â€¦HP
CNNweather

3:48 am ET May 18, 2022 RETWEET
A deadly cholera outbreak linked to contaminated drinking water has infected thousands of people in central Pakistaâ€twitter.com/i/web/status/1â€¦Hk
CNNweather