Insanely Sane: Humor brought everyone together 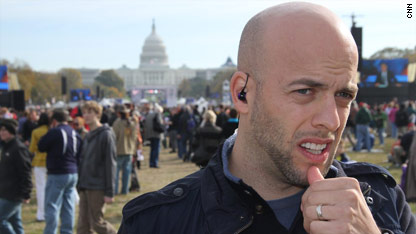 Okay, there’s no way to write this article without name dropping. To cut to the chase, I know Jon Stewart and Stephen Colbert, and you don’t.

I used to work for The Daily Show and the Colbert Report as the audience warm up act.  Not a bad day job.
But knowing the hosts didn’t mean I got to parade on stage at Saturday’s “Rally for Sanity and/or Fear.” I was in the audience with the thousands of fans, reporting on the events for CNN.

END_OF_DOCUMENT_TOKEN_TO_BE_REPLACED

Assisted by a colorful cast of characters, Comedy Central funnymen Jon Stewart and Stephen Colbert held a raucous rally on the National Mall Saturday in typical fashion before a cheering throng of
supporters.

Amidst all the hilarity, however, the "Rally to Restore Sanity and/or Fear" carried a message about Americans turning their backs on hate and working together to make the world a better place.

Stewart and Colbert staged a mock battle, with Stewart supporting peace and sanity and Colbert promoting fear before a crowd that stretched nearly the length of the mall, most of the distance between the Capitol and the Washington Monument.

We're five days out from midterm elections and three days away from Halloween. Let's get this fear wagon moving, shall we?

'Daily Show,' the morning after - President Obama's congenial yet somewhat tense conversation with Jon Stewart is one of the most viewed 30 minutes online today. Obama is trying to avoid what would be a scary scenario to the Dems if the Republicans sweep the polls. Heck, it could be a virtual GOP wave on Tuesday, writes CNN contributor John P. Avlon.

Obama's appearance was just part of his campaign to inspire voters, particularly the younger ones who helped put him in office (and apparently a lot of guys who watch the Daily Show). It also comes in the days before the Washington rallies "A Rally to Restore Sanity and/or Fear" that Stewart and comedian foil Stephen Colbert are hosting this weekend.

The rallies don't seem to have spooked Republicans so much as some of their own candidates. The search term "Karl Rove" was at the top of Google Trends, leading to stories about President Bush's former senior adviser saying Sarah Palin lacks "gravitas."

Does Rove not get how frightening a pit bull can be?

Vegetarians beware - We're not sure if this meathead recipe is trending, but it should be. So gross, so creative, so stinky. Pinch your nose like the many critics of last night's "Glee." "The Rocky Horror Picture Show" never sounded so lame as it did on the show, Gawker says. The Huffington Post said the show neutered "Rocky" by replacing the word "transsexual" with "tranny." Changing the lyrics to a classic musical? A scary statement on today's generation if you ask us. Next thing you know those kids will pose half-naked in a national men's magazine.

(Mega-fancy) House on the Hill - If $5 is all you can spare for a magazine, you'll be pretty well freaked out by this home built by Asia's richest man. It's in Mumbai, overlooking the city's slums. It has 27 floors for his family of six, three helipads, a 168-space parking lot, a pool, health club and an ice room with man-made flurries. Jeez, and we thought our rent was too damn high.

Virginia executes woman who hired killers: Teresa Lewis, called the mastermind in the murder-for-hire deaths of her husband and stepson, was executed Thursday night.

END_OF_DOCUMENT_TOKEN_TO_BE_REPLACED 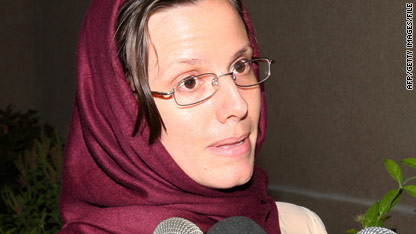 Freed hiker wants audience with Ahmadinejad - Sarah Shourd, the American hiker recently released from an Iranian prison, told CNN's "American Morning" on Friday that she would like to speak to Iranian President Mahmoud Ahmadinejad, who is in New York for the U.N. General Assembly.

Shourd said she would like to appeal to the Islamic republic's president to release her fiancée, Shane Bauer, and friend, Josh Fattal, who are still being held there. She would ask him to show the same mercy he showed in releasing her earlier this month.

Ahmadinejad told CNN's Larry King on Wednesday that he suggested Shourd be released but that he had no influence over the legal process. He said there was a chance Bauer and Fattal could be released, but it would be up to a judge to make that decision.

END_OF_DOCUMENT_TOKEN_TO_BE_REPLACED

Colbert, Stewart rallies on 'date of no significance'? 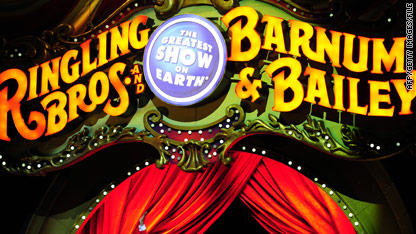 When Jon Stewart raised the idea of doing a march in Washington, he said he wanted to make sure it was "on a date of no significance."

Stewart publicly floated the idea of a counter-rally to Glenn Beck's much-publicized "Restoring Honor" rally on the National Mall in a profile in the September 12 edition of New York magazine. Beck's rally was held on the 47th anniversary of the Rev. Martin Luther King Jr.'s "I Have a Dream" speech, delivered in the same place.

So when Stewart and Comedy Central's other favorite funny man, Stephen Colbert, decided to announce rallies of their own in the nation's capital October 30, we had to take a look into history to see whether the date held a clean slate or whether there were some moments in time the two comedians might be ironically, or purposely, shining a light on.

Although it's likely any single day they chose could have some ironies to it, it turns out there are a number of interesting events in history that have taken place October 30.

Perhaps the double team of Stewart and Colbert are hoping their respective rallies will be regarded as the "Greatest Shows on Earth" - after all, P.T. Barnum's now-well-known circus did debut October 30, 1873. (If nothing else, it'd be a nod to the show's creator, who is also known for coining the phrase "there's a sucker born every minute"). Are you trying to send a tongue-in-cheek message to us, men of comedy?

Or perhaps the date of the rallies, and their place on the Mall, could be a nod to several historic moments in time. Here are a few of the other big events that have taken place on October 30. Are any the impetus behind the date's use? Or just a coincidence? Share your thoughts in the comments bellow.