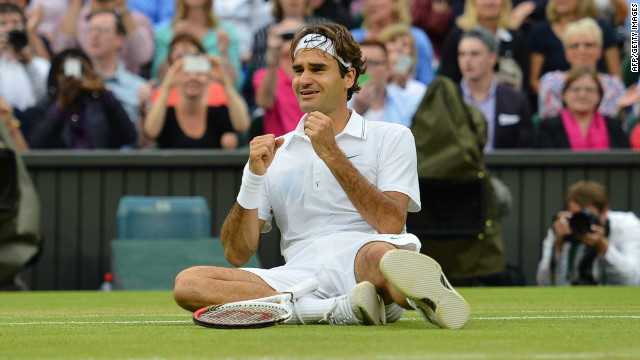 Nicholas Newlife has been dead for three years, but heâ€™s just given anti-poverty charity Oxfam a sizable boost - thanks to a bet he made years ago on tennis star Roger Federer.

That bet became a winner on Sunday, when Federer beat Andy Murray in four sets to claim his seventh Wimbledon title.

END_OF_DOCUMENT_TOKEN_TO_BE_REPLACED

What's going on at Wimbledon this weekend

History was made on Saturday when American Serena Williams defeated Poland's Agnieszka Radwanska 6-1, 5-7, 6-2, to win the 2012 Wimbledon's women's singles final. This is Williams' seventh finals appearance for the Grand Slam tournament, and her fifth Wimbledon win.

Williams and her sister, Venus, also defeated the Czech Republic's Andrea Hlavackova and Lucie Hradecka in the women's doubles final. The sisters have five singles titles each, and now, five doubles titles.

In the men's doubles final, Briton Jonathan Marray and Denmark's Frederik Nielsen beat Sweden's Robert Lindstedt and Romania's Horia Tecau. Marray's victory gave Britain its first men's doubles champion since 1936 and according to the Wimbledon blog, Nielsen is the first Danish player to win a Grand Slam title, ever.

"Oh my God I can't even describe..." Williams said after her singles win, according to the Wimbledon live blog. "I thank Jehovah for letting me get this far. I almost didn't make it , two years ago I was in hospital... It's so worth is and I'm so happy. I never dreamt of being here again. You just never give up."

Williams was in the hospital recovering from a pulmonary embolism 18 months ago.

Radwanska was noticeably disappointed about losing out on her chance to snag her first Grand Slam tournament win.

"I'm still shaking so much, so I think I have the best two weeks of my life you know?" Radwanska said. "Of course she played too good today. I already have great memories from 2005 when I won junior Wimbledon. I think it was not my day today but I will just try next year and we'll see. Thank you very much for the support. Thank you so much."

"We can't believe it. It's tough to sink in. I don't know what to say," Marray said afterwards.

On Sunday, Andy Murray will go head to head with Roger Federer in the men's singles final.

The last time a Briton reached the Wimbledon men's singles final, the photos taken of the event were in black and white.

On Friday, Andy Murray became the first one in 74 years. Now, heâ€™s up against six-time champion Roger Federer for the final on Sunday. No matter who wins, history will be made. If Murray wins, during this year of Queen Elizabeth II's Diamond Jubilee, you can bet the pubs will be full on Sunday night. If Federer wins, he will join American Pete Sampras and Briton William Renshaw atop the list of all-time men's singles champions.

The Wimbledon finals bring all of the drama to resounding conclusion, in crushing defeat or resounding victory, for two women and two men.

Perhaps you dine on strawberries and cream every summer in your best white outfit in honor of the international event. Or youâ€™re just tuning in to see if Murray makes it in one of those gripping human-interest sports stories viewers like to seize on.