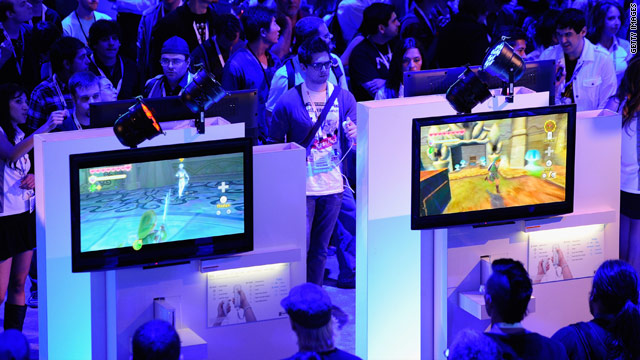 It's arguably the biggest video gaming event of the year. The Electronic Entertainment Expo, E3, started in 1995 as an annual showcase for the gaming world. Hundreds of companies, from multi-billion dollar corporations like Nintendo, Sony, and Microsoft, to little-known software developers use E3 hoping it will launch them towards digital success.Â  This year's E3 just finished up in Los Angeles and CNN has your front-row seat. Here are some highlights you've just Gotta Watch.

From Wii to U â€“ At the world's biggest showcase for video games, Nintendo made the biggest splash this week with the unveiling of Wii U, the next generation of its popular, motion-controlled gaming system.

END_OF_DOCUMENT_TOKEN_TO_BE_REPLACED

On the Radar: Voting, video games and Yemen

Go vote!Â - The most expensive midterm elections in history are happeningÂ as voters decide whoÂ will be their next representative, senatorÂ or governor.Â What happens at the polls todayÂ will likely beÂ considered a referendum on both the Democratic-controlled Congress and President Obama's first two years in office. Losses by the governing party are common in midterm elections, but the shift Tuesday could be historically dramatic, observers say. CNN's political team is covering every corner of the country. "I forgot to vote" will be a hard excuse to pull off this year. But why do that? After all, your vote counts in a big way this year.

High Court on video games - The U.S. Supreme Court will hear arguments in a challenge to a 2005 California law that bars the sale or rental of violent video games to minors.Â Â The case has stirred passionate debate on both sides. Video game makers say banning the sale of violent video games to children is a violation of free speech. They also say aÂ voluntary rating system already does enough to restrict young consumers from purchasing games rated "Mature." Parents, politicians and othersÂ contend that the law mustÂ protect children from depictions of extreme violence. If the state of California wins, retailers would face a $1,000 fine for violations, and the industry would be required toÂ place an "18" label on gamesÂ judged overly violent.

Yemen - Anwar al-Awlaki, an American-born militant cleric, was charged in absentia with incitement to kill foreigners at a hearing in Sanaa,Â Yemen's capital. U.S. authorities have linked al-Awlaki to Fort Hood shooting suspectÂ Maj. Nidal Hasan and the man accused in a Christmas Day bomb attempt. Prosecutors in a court Tuesday accused al-Awlaki, a key figure in al Qaeda's branch in Yemen, of inciting the killing of foreigners living there. The next hearing inÂ his trial is scheduled for Saturday.

Imran Khan's claims of a US-led conspiracy against him have become a staple at the many rallies he has held acrossâ€twitter.com/i/web/status/1â€¦W8
cnni

12:00 am ET May 28, 2022 RETWEET
Choose your color -- red or white. The bars and stands around Paris' Stade de France, the venue for Saturday's Chamâ€twitter.com/i/web/status/1â€¦Ib
cnni

10:45 pm ET May 27, 2022 RETWEET
Elon Musk has faced questions from the US Securities and Exchange Commission about how and when he disclosed his laâ€twitter.com/i/web/status/1â€¦gs
cnni

7:30 pm ET May 27, 2022 RETWEET
The World Health Organization reported that there are at least 650 cases of sudden and unexplained hepatitis in youâ€twitter.com/i/web/status/1â€¦5r
cnni

7:00 pm ET May 27, 2022 RETWEET
A January 6 rioter and alleged White supremacist was convicted Friday on all five charges he faced after hitching hâ€twitter.com/i/web/status/1â€¦WR
cnni