Bulgarian police released a composite image Wednesday of the man accused of carrying out a suicide bomb attack on a bus at Burgas airport last month, in which five Israeli tourists and the Bulgarian bus driver died.

The image shows the face of a clean-shaven young man with short dark hair, a pale complexion and brown or green eyes.

It was created by applying "modern technologies and techniques" to the data collected, the police said in a statement.

Anyone with more information about the man pictured is urged to contact the authorities.

More than 30 other Israelis were injured, some seriously, in the terror attack two weeks ago. The Israelis had arrived from Tel Aviv to take a vacation at a resort on Bulgaria's Black Sea coast.

The bomb is believed to have been concealed in a backpack the suicide bomber placed on a bus in a parking lot outside the airport.

[Updated 7:20 a.m. ET] Bulgarian police have been alerted to the possibility of a second suspect in a bomb attack that killed five Israeli tourists in Burgas, a high-level source within Bulgaria's Interior Ministry told CNN.

Investigators have determined that the bomb was detonated by a man caught on airport security videos about an hour before Wednesday's attack at Burgas International Airport. But they are now looking at the possibility that he had help.

According to the source, investigators have spoken to several eyewitnesses in attempt to identify the bomber.

They describe a man with short hair who spoke English with a "distinct" accent.

This is different from the man seen on the security video who has long hair, however, leading investigators to look into the possibility that a second person may be involved, a source said.

Police in Burgas have been given an identikit photo of the man and told to look out for anyone matching this description.

Earlier, a lower-level source at the Interior Ministry told CNN that police were looking for a second suspect, possibly an American.

That was later corrected by a higher-level source, who said a second suspect was a possibility, but had not been confirmed. 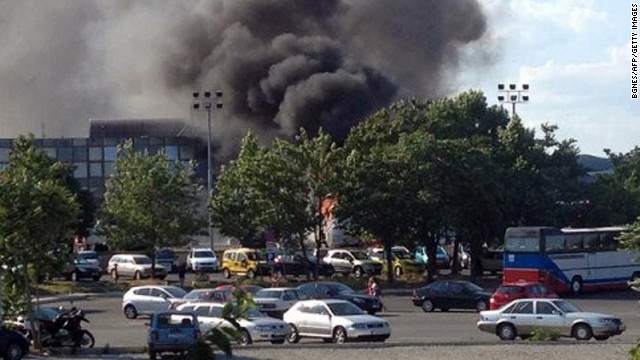 Smoke rises over Bulgaria's Burgas Airport on Wednesday after an explosion on a bus carrying Israeli tourists.
July 18th, 2012
11:45 AM ET

[Updated at 2:24 p.m. ET] Six people were killed and 30 injured in an explosion on a bus carrying Israeli tourists at a Bulgarian airport, Vania Valkova, director of the Bulgarian interior ministry press office, said Wednesday.

She said Bulgaria's interior minister was considering all scenarios, including a terror attack.

[Posted at 11:45 a.m. ET] At least three people were killed in an explosion on a bus outside Burgas airport in Bulgaria, an interior ministry spokeswoman said Wednesday.

The Israeli foreign ministry said that the explosion occurred on a bus carrying Israeli tourists from the airport on Bulgaria's Black Sea coast and that there were a number of casualties.

It is not clear whether the explosion was the result of an attack, the foreign ministry said.

Vania Valkova, director of the Bulgarian interior ministry press office, was not able to confirm the nationalities of those killed.

The tourists' plane landed in Bulgaria at 5 p.m., the Israeli foreign ministry said. Valkova said the bus was in the parking zone when the blast occurred.

Israel's Channel 10 station reported that there had been a combined attack of gunfire and explosives outside Burgas airport.

Guy Ailer of Israel, who said he was on a nearby bus, told Channel 10 he saw bodies and injured people at the scene after the explosion.

- CNN's Stephanie Halasz and Jennifer Deaton contributed to this report. 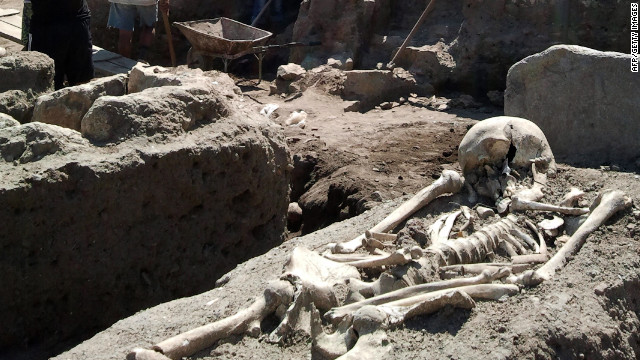 This skeleton was found during excavations of a monastery in the city of Sozopol, Bulgaria.
June 7th, 2012
12:32 PM ET

The discovery of the graves of suspected vampires in Bulgaria may turn into a tourism gold mine, according to local news reports.

During excavations of a monastery in the city of Sozopol, Bulgaria's National Museum of History says it unearthed two skeletons that showed the deceased person had been stabbed through the heart with an iron rod.

"This was (the) customary way (in) Bulgarian medieval tradition to deal with people which were presumed to be vampires," the museum's website says.

People at the time of the burial of the skeletons, about 700 years ago, thought that stabbing the corpses multiple times with an iron rod through the heart would prevent the dead from rising and attacking the living, museum director Bozhidar Dimitrov said, according to a report from the Sofia News Agency.

Dimitrov said more than 100 such "vampire" burials have been discovered in Bulgaria over the years, according to the Sofia News Agency.

But headlines of the latest find have piqued interest in the U.S., Europe and Asia, the report said, and tour operators are fielding inquiries about what it called "vampire vacations."

Already, people were lining up at the excavation site at the monastery of St. Nicolas the Wonderworker, the Sofia News Agency reported.

Big lines for vampires could pump even more blood into the country's expanding tourism industry. Bulgaria led the European Union last year in the increase in hotel occupancy by foreigners, with numbers up almost 20% over the previous year.

No stats on how many of those folks slept with the lights on, however. 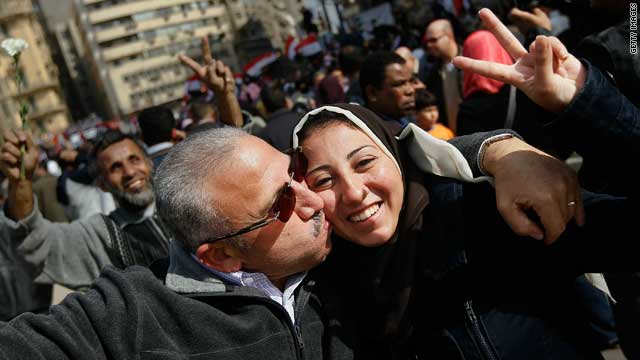 Egypt's revolution has only just begun

Egypt's revolution takes me back to the fall of communism in my native Bulgaria.

The first breath of freedom, the joy in the heart and the high hopes for the future are simply overwhelming!

But in Bulgaria that joy was soon tempered by the realization that the battle for change had only just begun.

If the country was to have true democracy, the system had to change, not just the leaders at the top. END_OF_DOCUMENT_TOKEN_TO_BE_REPLACED 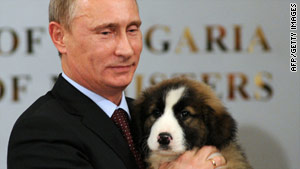 The dog was a gift from Bulgarian Prime Minister Boyko Borisov in celebration of an agreement to build a gas pipeline between the two countries.

The Bulgarian shepherd has a Bulgarian name, Yorgo, but Putin wants to give it a Russian moniker, the Sofia news agency Novinite.com says.

Widely circulated photos of Putin nuzzling the fuzzy puppy could soften the ex-KGB agent's judo-wrestling, tough-guy image, for whatever reason, the Globe and Mail of Toronto, Canada, noted.

"Russia's man of deeds hugged it affectionately and kissed it on the nose," the official RIA news agency dutifully reported.

END_OF_DOCUMENT_TOKEN_TO_BE_REPLACED

Thousands of blondes descend on Bulgaria 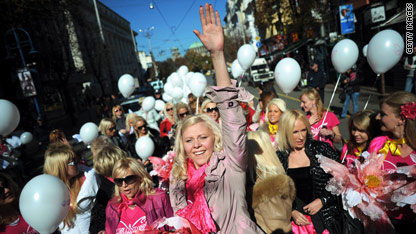 Blondes in Bulgaria try to make the world a better place.

If you ever doubted blonde ambition, "This Just In" presents ... a bunch of blondes gathered in the capital of Bulgaria.

The International Blondes Congress swept the city of Sofia over the weekend. Naturally, the event was organized by the Bulgarian Blondes Association (its site is purple and pink!).

About 1,000 fair-haired lovelies (wearing a lot of pink!) came from across the globe to sing and dance and laugh and dress like cheerleaders in a shopping mall, according to a Bulgarian news agency.