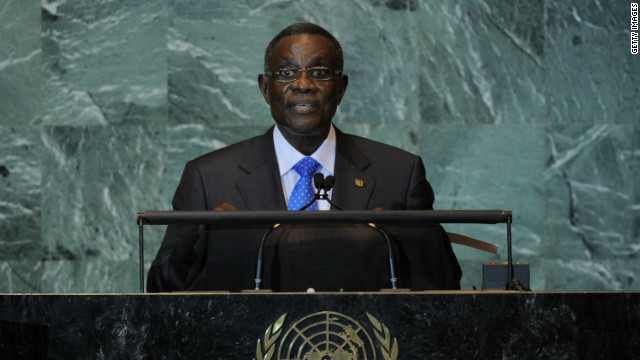 The president of the West African nation of Ghana, John Evans Atta Mills, has died, the president's chief of staff said in a statement Tuesday.

He died at a military hospital Tuesday afternoon, the statement said.

Mills was a former law professor and served as Ghana's vice president from 1997 to 2000. He ran for president unsuccessfully in 2000 and 2004 before winning the election in 2009.

U.S. President Barack Obama met with Mills when he visited Ghana in July 2009. Obama praised Ghana as a model for democracy and stability when Mills visited Washington this year.

"Ghana has become a wonderful success story economically on the continent," Obama said. "In part because of the initiatives of President Mills, you've seen high growth rates over the last several years. Food productivity and food security is up. There's been strong foreign investment."

Part of a former British colony, Ghana was among the first African countries to gain its independence, in 1957. It endured a series of coups before a military dictator, Jerry Rawlings, took power in 1981. Rawlings led Ghana through the transition to democracy about 10 years later.