At least 272 people were killed in a fire at a prison in central Honduras, a local fire department said Wednesday.

The blaze was under control, but the exact number of fatalities remained unknown, said Jose Turcios, spokesman for the Comayagua, Honduras, fire department.

Some 35 prisoners were transported to a local hospital, he said, and some were then taken to a hospital in the capital.

Five of the prison's units - more than half of the prison - were affected by the fire, Turcios said. The prison holds 851 prisoners.

The cause of the blaze is under investigation, he said.

Rina upgraded to hurricane as it nears Mexico, Cuba

[Updated at 2:16 p.m. ET] Rina has strengthened into a hurricane, according to reports from a U.S. Air Force reconnaissance aircraft.

A special advisory will be issued upgrading the storm to a hurricane, the National Hurricane Center said Monday afternoon.

Forecasters said Rina was expected to strengthen into a hurricane by Tuesday and could make landfall in Mexico's Yucatan Peninsula later this week. The storm had maximum sustained winds of 45 mph and was moving northwest at 6 mph.

Tropical Storm Harvey has made landfall over Belize and is expected to move into northern Guatemala on Saturday afternoon or night.

The storm has maximum sustained winds of 60 mph, with higher gusts, and is heading west at 13 mph, according to the Miami-based National Hurricane Center.

Harvey made landfall on the coast of Belize, near the town of Dangriga. It is expected to weaken now that it is moving inland.

A tropical storm warning is in effect for the the coasts of Guatemala and Belize and for the coast of Honduras from Punta Sal westward. A warning means that tropical storm conditions are expected within 36 hours.

As of 2 p.m. ET, Harvey was located about 35 miles south of Belize City.

All fourteen people on board an Central American Airlines flight that
crashed in Honduras Monday died, the fire department said. 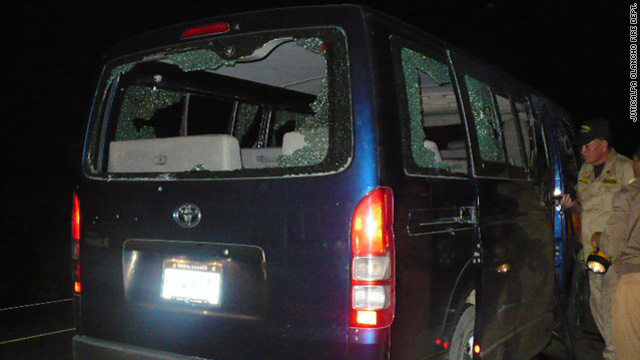 Police inspect a bus where eight people were killed by gunmen Thursday.
January 7th, 2011
12:54 AM ET

Eight people were killed and three others were injured after a group of gunmen opened fire on a private bus in Honduras, officials said.

Photos that firefighters took after the attack showed a woman slumped over, her head on a seat covered with blood stains and shattered glass. Outside the bus, rescuers surrounded a child covered with blood. Body bags sat on the roadside while investigators examined the scene. 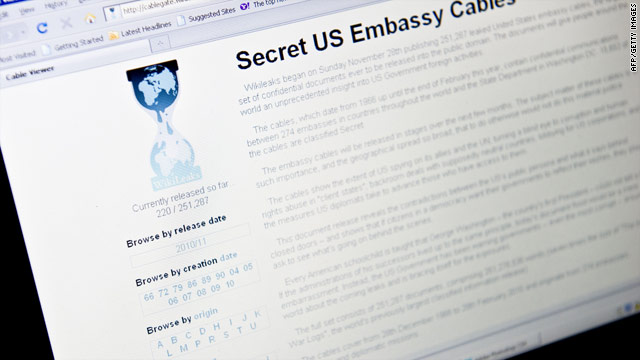 WikiLeaks, a whistle-blowing website known for leaking state secrets, released on Sunday its latest batch of controversial documents. It has posted the first of what it says will be more than 250,000 secret U.S. diplomatic cables.

- Ecuador has asked WikiLeaks founder and editor-in-chief Julian Assange to come to Quito and discuss documents regarding Ecuador and other Latin American countries. Ecuador expelled two U.S. diplomats in February 2009, accusing them of meddling in its internal affairs - allegations the State Department denied. The foreign ministry in Quito suggested Assange, an Australian citizen, apply for residency there.

- WikiLeaks documents posted on the websites of the Guardian and the New York Times suggest China is losing patience with its long-time ally North Korea, with senior figures in Beijing describing the regime in the North as behaving like a "spoiled child." According to cables obtained by WikiLeaks and cited by the Guardian, South Korea's vice-foreign minister Chun Yung-woo said he had been told by two senior Chinese officials (whose names are redacted in the cables) that they believed Korea should be reunified under Seoul's control, and that this view was gaining ground with the leadership in Beijing.

- The world's military shopping list is being exposed through the WikiLeaks publications. State-of-the-art missiles and American military helicopters are a frequent topic of discussion in the released diplomatic cables, which also show a keen interest in what weaponry Iran has and how to defend against them.

- From 2005 to 2009, U.S. diplomats regularly reported that Brazil tried to distance itself from what it saw as an "overly aggressive" American war on terror, and was highly sensitive highly to public claims suggesting that terrorist organizations have a presence in the country, according to cables released by WikiLeaks. But Brazil's counter-terrorism policy seemed to shift in 2009, with a cableÂ detailing the government's strategy to deter terrorists from "using Brazilian territory to facilitate attacks or raise funds."

- Former President George W. Bush told a forum at Facebook's headquarters Monday that the document leak is "very damaging," adding that it may significantly hurt Washington's image abroad. "It's going to be very hard to keep the trust of foreign leaders," the nation's 43rd president said. "If you have a conversation with a foreign leader and it ends up in a newspaper, you don't like it. I didn't like it."

Here's a look at the leak, an overview of how WikiLeaks works and a summary of what some of the documents say about a variety of topics.

- Sunday's leak contained the first of what the site says will be 251,288 cables that it plans to release piecemeal in the coming weeks or months.

END_OF_DOCUMENT_TOKEN_TO_BE_REPLACED

Hurricane watch in effect for Honduras ahead of Richard

AÂ hurricane watch and tropical storm warning remained in effect Friday night for Honduras from the Nicaragua/Honduras border westward to Limon, Honduras and the Bay Islands.

A hurricane watch means that hurricane-force winds are possible, and is usually issued 48 hours in advance of tropical-storm-force winds.

Tropical Storm Richard was slowly beginning to shift toward the west on Friday morning after being nearly stationary in the southwestern Caribbean since it formed on Thursday.

Satellite imagery indicated that the storm was beginning to become more organized and strengthen. However, a hurricane hunter aircraft investigating the storm on Friday morning was unable to find stronger winds, so Richard remains a minimal tropical storm with sustained winds of 45 mph with higher gusts.

Richard is now moving slowly toward the west atÂ 5 mph. A west-to-northwest motion at an increasing forward speed is expected over the next couple of days, the National Hurricane Center said. The current forecast track from the Hurricane Center shows Richard approaching the coast of northeastern Honduras late Saturday.

Richard is expected to produce rainfall accumulations of three to five inches over northern Honduras with isolated higher amounts of up to seven inches. Accumulations of this amount could produce life-threatening flash floods and mud slides, forecasters said.

END_OF_DOCUMENT_TOKEN_TO_BE_REPLACED

Less than a year after his predecessor was removed from power in a military-led coup, Honduran President Porfirio Lobo says he has found out that some political opponents want to overthrow him, a statement from the president's office reported.

Lobo said Tuesday he knows the names of those who are plotting against him and warned them not to try a coup.

Asked by reporters if he is behind a movement to replace the Supreme Court president, Lobo said, "It's the president of the republic they want to get rid of. But they're going to tangle with me. Never should we forget that for every action there's a reaction. I tell you, we have everything well tracked. We have located all of them. I know who they are. I have all the information, and I believe they have made a mistake with me."

The death toll from Tropical Storm Agatha is growing, with 123 reported killed in Guatemala, 14 in Honduras and nine in El Salvador.

At least 90 people are missing in Guatemala and another 69 are injured, the nation's emergency agency reported late Monday.

The previously reported toll for Guatemala was 92 deaths, 54 people missing and 59 injured.

Colombia, Cuba, Haiti, Honduras and Venezuela were listed in the 2009 report released Thursday by the Inter-American Commission on Human Rights. All but Honduras also had been listed in the 2008 report. Honduras was added this year because of a military-led coup in June that toppled a democratically elected president.

END_OF_DOCUMENT_TOKEN_TO_BE_REPLACED

The most lasting part of Trump's climate legacy â€” and one that cannot be undone â€” may be the time the administrattwitter.com/i/web/status/1â€¦v59xBj
cnni

5:11 pm ET January 18, 2021 RETWEET
"The whole world is watching. From Day One, President-elect Joe Biden has a tall order -- to rebuild around the worâ€twitter.com/i/web/status/1â€¦wf
cnni

4:50 pm ET January 18, 2021 RETWEET
The dissolving of one of Americaâ€™s most enduring transfer-of-power rituals is just one of the snubs the Trumps aretwitter.com/i/web/status/1â€¦jhP8
cnni

4:29 pm ET January 18, 2021 RETWEET
"On Wednesday, Joe Biden will be sworn in as the President of a nation at a pivotal moment, and the world will be wâ€twitter.com/i/web/status/1â€¦VB
cnni