Malawian President Bingu wa Mutharika, once hailed as a positive steward for the southern African country, has died after a heart attack, government officials said Friday.

His body was flown to South Africa, the officials said.

The former World Bank economist first became president in 2004 after campaigning as an "economic engineer," and was re-elected five years later. 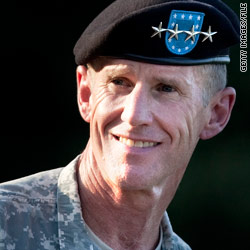 The ousted commander ofÂ U.S. troops in Afghanistan appeared before an audience at the Daily Beast's Innovation Summit on Friday in New Orleans.

â€śI think it's sad,â€ť McChrystal said regarding Wikileaks, calling the website's release of classified documents illegal and a "threat to comrades."

â€śI think that a level of responsibility towards our people needs to be balanced with any argument for a need or right to know. â€ś

McChrystal also spoke about the Afghan people's perception of the U.S. - sayingÂ that despite technological strength, the U.S.Â appeared Â "cavalier" in the way it carried out operationsÂ that ledÂ to civilians being killed.

â€śIt wasn't something that we could simply say, 'War's difficult, people get killed, and you have to accept that ,' â€ť he said.Â  "... I don't think we were being cavalier, but their perception was that way.â€ť

With noÂ team to call home stateside, hoopster Allen Iverson is taking his services overseas, according to published reports.

Sources have told Yahoo! Sports that the onetime all-star signed a two-year, $4 million contract with Besiktas in the Turkish basketball league. He could join the team, one of Turkey's best, before its November 6 game against Bornova, Yahoo! reported.

Seref Yalcin, an executive board member for the team, told the Turkish daily Hurriyet that heÂ planned to haveÂ a final face-to-face meeting with Iverson on Friday and that he expected the 35-year-old point guard to arrive in Istanbul in 10 days.

Iverson, also known as "A.I." or "The Answer," spent 14 years in the NBA and racked up an impressive resume. In addition to being named an all-star 10 times, Iverson averaged 27.1 points a game, one of the top averages in NBA history. He also was co-captain and leading scorer for the 2004 U.S. Olympic team.

Iverson's career has been riddled with controversial moments and observers have long said his inability to find work in the NBA may have as much to do with his personality as it does with his age or performance on the court.

The two men were arrested in December at their home in Blantyre, Malawi, for professing love and marriage in the traditional way. Police discovered the couple when local newspapers reported on their engagement ceremony, known as a chinkhoswe.

END_OF_DOCUMENT_TOKEN_TO_BE_REPLACED

Mercedes' F1 team announced that it has "mutually agreed" to end its partnership with a firm allegedly involved inâ€twitter.com/i/web/status/1â€¦oE
cnni

12:45 pm ET December 8, 2021 RETWEET
Instagram launches "Take a Break" tool, which will encourage users to spend some time away from the platform afterâ€twitter.com/i/web/status/1â€¦7y
cnni