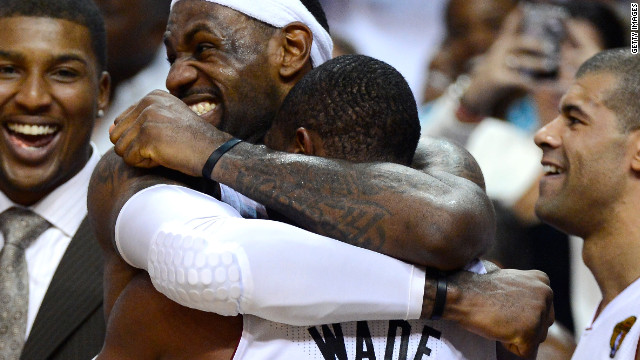 The Miami Heat defeated the Oklahoma City Thunder 121-106 Thursday night in Miami to win the NBA championship in five games.

League MVP LeBron James scored 26 points, and had 11 rebounds and 13 assists for Miami. Chris Bosh scored 24 points and Dwyane Wade 20 for the Heat.

It was James' first title since signing with the Heat as a free agent in 2010. James won two MVP awards over seven seasons with the Cleveland Cavaliers but no NBA titles. James was drafted by Cleveland out of high school in nearby Akron, Ohio.

"This is a dream come true for me. This is definitely when it pays off," James said after the game. James was named the series MVP.

The Heat lost last year's finals to the Dallas Mavericks.

"We had to go through last year," Wade said after the game, according to NBA.com. "As much as it hurt, we had to experience it to get here, this season."

The Heat, who won four games straight to win the best-of-seven series, took a lead early in the game and never let up, leading by 25 points in the final minutes of the third quarter.

"I think when you play against the best, you learn. You don't get better by playing bad teams," Brooks said. "We've played against the best three teams in the last few years and we've learned."

Durant had a game-high 32 points but said losing in the finals is the hardest thing he and his team have been through.

"It's tough, that's the only way to explain it. As a whole I'm proud of the guys for how we've fought all season," Durant said. "I wouldn't want to play for anyone else or any other city."

US House select committee issues its first round of subpoenas, targeting four Trump loyalists in its January 6 inveâ€twitter.com/i/web/status/1â€¦p2
cnni

7:39 pm ET September 23, 2021 RETWEET
US officials have formally returned the Gilgamesh Dream Tablet to Iraq after the Justice Department had deemed thatâ€twitter.com/i/web/status/1â€¦A3
cnni

7:11 pm ET September 23, 2021 RETWEET
Looking forward to seeing this roll out. Appreciate you and your long history of exploring this topic #RealitCheckâ€twitter.com/i/web/status/1â€¦Fv
sarasidnerCNN

7:02 pm ET September 23, 2021 RETWEET
The US District Court of Wyoming has issued a federal arrest warrant for Brian Laundrie, according to the FBI's Denâ€twitter.com/i/web/status/1â€¦Ls
cnni