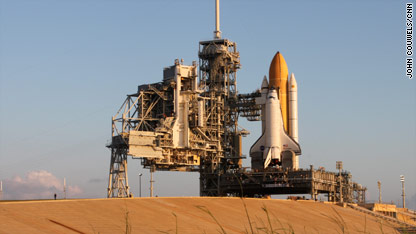 Shuttle Discovery arrived at the launch pad this week ahead of its final lift-off on Nov. 1.

This week, NASA rolled out the space shuttle Discovery ahead of its final launch on November 1.  The final shuttle launch is slated for late February, effectively ending the U.S. shuttle program which began in the 1960s.

As the end nears, NASA has relaxed the rules so employees can get an up-close view of the vehicles they have passionately worked on for many years.

END_OF_DOCUMENT_TOKEN_TO_BE_REPLACED

Several shrimp boats troll the waters off the Florida panhandle – an odd sight these days, since fishing has been banned in the area.

But these vessels are not looking for shrimp: they are hunting oil on the surface of the water.  And soon, these boats will be outfitted with a homemade contraption that can pick up tons of the stuff in just a few hours.