Rescue date in Chile could slip to Thursday

The target date to begin rescuing the 33 miners trapped in Chile is still Wednesday, but the start of the operation could slide into early Thursday, Chilean Mining Minister Laurence Golborne said Monday.

Tests of the hole through which rescuers hope to hoist 33 miners trapped nearly a mile below the surface of the Earth have proved "very promising, very positive," he said Monday. "Not even dust fell inside."

"We are extraordinarily content," Minister of Health Jaime Manalich said.

His prediction came shortly after workers cheering "Viva Chile" completed the installation of steel tubing to reinforce the path that rescuers plan to use to hoist the trapped miners to the surface.

About 96 meters of sheet metal has been put in place to line the tunnel that was bored 2,300-feet deep, according to Jeff Hart, operations manager for Layne Christensen Co., who has been in Chile advising workers on the drilling and casing operations. 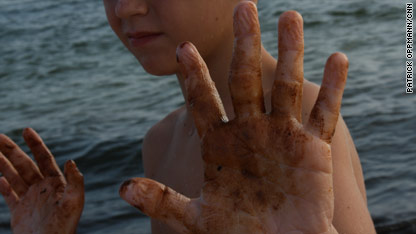 That's not a bad reworking of the Johnny Cash song, "I've Been Everywhere," it's just a few of the places I have visited while covering the growing Gulf oil spill disaster over the last several weeks.

AS CNN has dispatched teams of journalists across the region to cover this vast story, I am constantly amazed by the dedication and tenacity of my colleagues.

For many, there have been too many 4 a.m. to 11 p.m. days to count. I have seen satellite truck engineers lug hundreds of yards of cable so a reporter can be live from an oil slicked coastline; photojournalists trudge down beaches to get that key shot and editors burn the midnight oil to make their pieces perfect.

Even more amazing are the stories that the people affected by the spill have shared with me.

There was the woman, a single mother, who eked out a living her entire life for her family catching shrimp and crab. On the day that fishing was closed because of the slick, I asked her what she was going to do for work. She had no clue.

There was the leader of a survey team that goes out and finds every piece of oil on a beach and photographs, measures and reports it so they can better understand how the slick is traveling. Sometimes, he said they do the same beach day after day as they are cleaned and then covered by oil again.

There was the little kid on the beach who came running up to his mother obviously terrified of something. As he sped by, he held up his oil covered hands. I am afraid, we are going to see a lot more of those kinds of images. 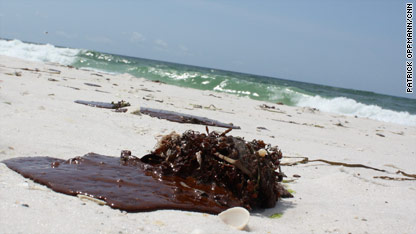 Tar sits on the beach in Gulf Breeze, Florida, on Friday.

For days, CNN's small army of reporters, photographers and producers has been repositioning toward Florida as oil was expected to come ashore in the Sunshine State.

And on Friday morning, tar balls - hundreds of small bits of hardened oil - littered Pensacola's white beaches. Our iReporters had been saying they had spotted tar balls nearby and in different areas a few days earlier. So we set out to check the beaches.

Tourists were the first to begin cleaning it up. iReporter Marc Sigler said he had been camping in Fort Pickens on Tuesday when he saw tar balls; they spent the next day swimming, picking it up and cleaning the beach. iReport: See Sigler's photos

Further south on the beach on Friday, we saw blobs the size of a Frisbee of reddish-brown oil.

Nobody knew for sure whether the tar was from the Deepwater Horizon disaster. Local officials said that so much tar had been piling up that they didn't have the resources to test all the balls and blobs of oil locally, so they would be assuming that if they came in such large amounts now, they were probably from the disaster in the Gulf. Similar tar balls and oil slicks have shown up on beaches along the Gulf since the rig exploded and sank.

Friday afternoon, reporters and residents got the answer they were waiting for: Florida's Division of Emergency Management issued a statement saying, "tar patties and tar balls have been confirmed in widely scattered areas east of Pensacola."

Reconnaissance flights are taking place to determine all of the locations nearby that may be affected. While that goes on, some tourists will keep on cleaning - and worrying.

Tourist Catherine Maloney looked at the blobs of oil with surprise and disgust before taking pictures of them.

"This is going to affect this area for years," she said. "It's already so quiet, it feels like a hurricane came." 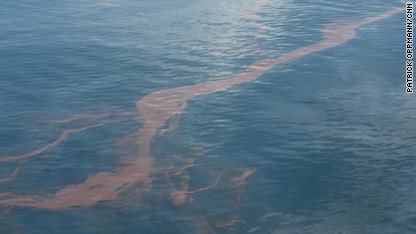