In a remarkable report she talks with some of the survivors and some Afghan guards on duty at the military camp from where Staff Sgt. Robert Bales left on his alleged killing spree.

The video at the top of this story is Hakim’s account of her journey to the remote villages near Kandahar and what she was told.

END_OF_DOCUMENT_TOKEN_TO_BE_REPLACED 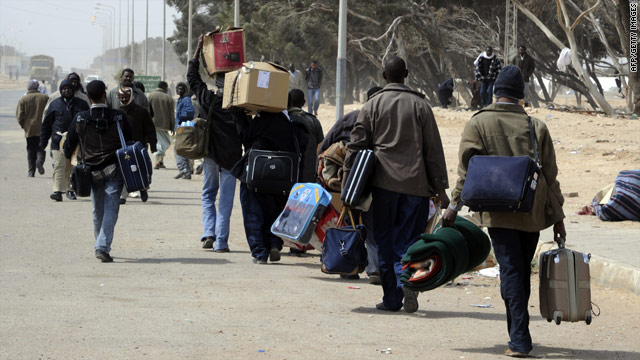 Refugees head toward Libya's border with Tunisia on Wednesday.
March 9th, 2011
10:03 AM ET

Libya - Violence in Moammar Gadhafi's Libya was increasing Wednesday as forces loyal to the strongman unleashed bombs and artillery on makeshift rebel forces in the eastern oil city of Ras Lanuf. The latest fighting followed another defiant speech from Gadhafi that aired Tuesday night on state television, in which he again insisted that youths misled and drugged by al Qaeda were to blame for the fighting.

Peter King - The New York Republican congressman says he is determined to use his powerful post as House Homeland Security Committee chairman to hold a highly controversial hearing on what he has dubbed radicalization of Muslims in the United States. Dana Bash, CNN's senior congressional correspondent, profiles the man who says he thinks every day about the 9/11 terrorist attacks.

Rare earth elements - They are the elements which occupy those two orphaned rows at the bottom of the periodic table. They're essential for our cell phones, our computer hard drives, our HDTVs. And they are running short. China, which controls supplies of 97% of these materials, doesn't like sharing them with the West. And the only U.S. mine for rare earth elements went out of production after a radioactive waste accident in the 1990s. CNN's John Sutter looks at what rare earth elements mean to us.

Ireland airspace - Airspace over Ireland will reopen at 1300 local time after ash from an Icelandic volcano forced a six-hour shutdown, the Irish Aviation Authority says.  Read the full story

UK election - There are just two full days of campaigning left for candidates to make their mark ahead of the UK's general election on Thursday. See the latest election coverage