Several people were hurt when an Amtrak train derailed after striking a dump truck at a public crossing near Mendonâ€twitter.com/i/web/status/1â€¦mQ

An Amtrak train passing through an intersection without crossing gates in rural Brentwood, California, collided witâ€twitter.com/i/web/status/1â€¦er

More than 1,000 people were in a shopping mall in central Ukraine that was hit by a Russian missile, President Zeleâ€twitter.com/i/web/status/1â€¦z9

The Supreme Court rules a school district violated the First Amendment rights of a football coach when he lost hisâ€twitter.com/i/web/status/1â€¦Kt 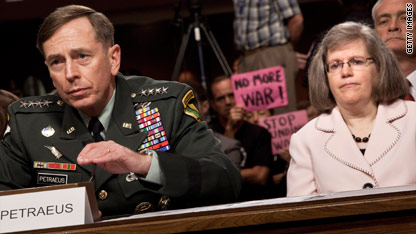 Gen. Petraeus, with his wife Holly behind him, answers questions during his confirmation hearing.

Holly Petraeus sat behind her husband in the committee hearing room wearing a white suit, sharply detailed with stitching around the collar. Her shoulder-length hair and clear rimmed glasses gave her the air of a woman who took the task at hand seriously. On this day, her task at hand was to support her husband as he sat for confirmation hearings in his bid to become the next leader of the U.S. military effort in Afghanistan.

Senator Carl Levin opened the hearing by acknowledging not the work and sacrifice of General David Petraeus, the incoming commander of the Afghanistan effort, but the sacrifice of his wife in supporting the incredible demands of her husband's service since 9/11.

"Your wife, Holly is with you this morning, and so we all want to thank her personally for her commitment, and her sacrifices along the way," said Levin. "I must tell you general that her understanding of what you're doing, of your patriotic duty as you are now doing again, taking over command in Afghanistan, her understanding, support of that is truly inspiring. We thank her. We profoundly thank you, Mrs. Petraeus." END_OF_DOCUMENT_TOKEN_TO_BE_REPLACED

Petraeus nomination moves forward– The Senate Armed Services Committee has voted to favorably report the nomination of Gen. David Petraeus to the full Senate as they decide whether to endorse him as the top U.S. commander in Afghanistan. Tuesday's hearings raised a number of issues with the U.S.-led action in Afghanistan, including differing opinions about a plan to withdraw troops as early as July 2011.

Four-star retirement- As the process moves forward for putting Petraeus at the head of the Afghanistan mission, the White House is considering how it will say goodbye to the former occupant of that position. White House Press Secretary Robert Gibbs said Tuesday that the administration will do what it can to make sure Gen. Stanley McChrystal receives a four-star retirement after explosive comments in a Rolling Stone magazine by him and his staff about the mission in Afghanistan.

Spies among us– A former Soviet spy who headed KGB operations in the U.S. in the 1970s, Oleg Kalugin, tells CNN he is "amazed" that Moscow is engaging so heavily in espionage against Washington. This, as Russian officials admits 11 suspected spies are in fact Russian nationals, but denies they were acting against the United States. Kalugin told CNN he was "amused" by reports of the arrests. "It is a sign of the decadence of the Russian intelligence services," he said.

The contractors' role– An interesting tidbit from Walter Pincus at the Washington Post focuses on the roles that contractors are playing in Psychological Operations. According to Pincus, the Department of Defense plans to spend some $1 billion on psychological operations in 2011, with nearly 40 percent of that money going toward contracted work. The congressionally-appointed Wartime Contracting Commission has been tackling the question of what is "inherently governmental" when it comes to government work that should not be hired out. 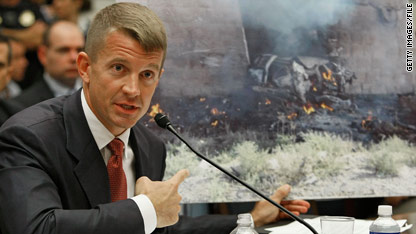 Xe, the private contractor formerly known as Blackwater, is getting a new contract worth about $120 million to protect CIA facilities in Afghanistan and elsewhere. Although the contract may be new, the relationship isn't.

Protecting CIA teams and sites in Afghanistan is a job Blackwater/Xe has been doing since early 2002, when the Agency's Henry Crumpton led a successful push against the Taliban in the post-September 11 era. Crumpton's teams made it to Kabul so quickly that they didn't even have enough bodies to secure everything that needed securing, so amid a big push at Langley by former CIA Executive Director Buzzy Krongard, Blackwater got the deal.

That was how the relationship began. It hasn't changed much despite the incredible public relations lows the company has experienced, though the personal relationship between the company and the Agency hasn't been without its own ups and downs.

In December, Xe lost another significant contract with the CIA after the company's owner, Erik Prince, pulled a Gen. McChrystal with Vanity Fair. He boasted of his company's relationship with the Agency in an article that had some at Langley so unsettled, they not only canceled the contract, they made it clear that they thought Prince was living in a dream world.

END_OF_DOCUMENT_TOKEN_TO_BE_REPLACED 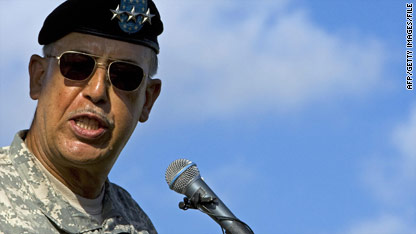 END_OF_DOCUMENT_TOKEN_TO_BE_REPLACED

There was a time when Blackwater owner Erik Prince planned to grow his fledgling private contracting company into a family empire. But that was a long time ago. Today, the controversial contracting powerhouse that now goes by the name Xe, is up for sale.

In a few short years, Prince managed to turn a start-up firing range facility aimed at special forces and law enforcement, into a billion dollar empire that the U.S. State Department insisted it needed in order to perform its mission in Iraq, providing security personnel to protect diplomats and others who were spearheading reconstruction efforts.

END_OF_DOCUMENT_TOKEN_TO_BE_REPLACED

A team of six has arrived in Iraq with a mission few would envy. They are looking for new insights into how to deal with the contractor phenomenon. The Congress-appointed Commission on Wartime Contracting is trying to figure out how the U.S. government can do a better job overseeing the virtual shadow army that has arisen from the private sector in less than a decade.

The bipartisan committee, co-chaired by Michael Thibault and Christopher Shays, is housed in a modest office facility in Virginia, not far from the Pentagon. On a recent visit, I was struck by the enormity of the task they've been given, to report back to Congress on better ways to manage this force multiplier. It's a huge task, seeing as how there are now more contractors in Iraq and Afghanistan than there are U.S. troops.

"American taxpayers are paying for billions of dollars' worth of services from private security contractors," said Thibault, "but there are a lot of troubling questions about contract management and oversight, use of force, interagency coordination, use of subcontractors, and transition planning as the United States prepares to exit Iraq. We'll be looking at all of them to add to the knowledge gained from our stateside research and public hearings."

The government has been playing a game of catch up since private contractors were hired by the tens of thousands to do everything from logistics support to security in places like Iraq and Afghanistan.

END_OF_DOCUMENT_TOKEN_TO_BE_REPLACED

No doubt about it, Michael Morell is an Agency man. As the CIAâ€™s current Director for Intelligence, Morell has put in some 30 years and counting and has done an impressive job of climbing the ranks in the intelligence world while keeping critics at bay, no small feat in todayâ€™s controversial intelligence environment.

END_OF_DOCUMENT_TOKEN_TO_BE_REPLACED

For nearly eight years he sat at the helm of the world's most infamous private security contracting company. Today, former Blackwater president Gary Jackson is wanted by authorities to answer to charges of weapons violations.

An indictment filed last week in federal court lays out just how prosecutors believe Jackson and other current and former Blackwater employees skirted gun laws in the company's pursuit of lucrative security and training contracts. The charges are the most serious yet to be levied against former heads of the company which has rebranded itself as Xe.

END_OF_DOCUMENT_TOKEN_TO_BE_REPLACED

Ghislaine Maxwell is set to be sentenced today for her sex trafficking conviction connected to her role facilitatinâ€twitter.com/i/web/status/1â€¦h4
cnni

5:30 am ET June 28, 2022 RETWEET
Japan urges millions of people living in and around Tokyo to use less electricity and ration air conditioning as thâ€twitter.com/i/web/status/1â€¦KW
cnni

5:15 am ET June 28, 2022 RETWEET
A crocodile roaming an Indonesian village for two days was captured by a resident using just a rope, and will be reâ€twitter.com/i/web/status/1â€¦jP
cnni

5:00 am ET June 28, 2022 RETWEET
Some of the worldâ€™s wealthiest nations are banning the import of Russian gold to further tighten the vise on Russiatwitter.com/i/web/status/1â€¦TOU6
cnni

3:45 am ET June 28, 2022 RETWEET
The US Centers for Disease Control and Prevention has added two destinations to its "high" category for Covid-19 riâ€twitter.com/i/web/status/1â€¦ke
cnni

1p Tuesday tomorrow, weâ€™ll find out. If not beforetwitter.com/johnwdean/statâ€¦r6
susancandiotti

7:55 pm ET June 27, 2022 RETWEET
â€œThe hearing is scheduled for 1 p.m., according to a news release issued by the committee, in which it provided notwitter.com/i/web/status/1â€¦97dI
susancandiotti

At least 44 migrants were found dead in a semi-truck in San Antonio, and 16 others were taken to hospitals, city coâ€twitter.com/i/web/status/1â€¦c4
cnnbrk

10:01 pm ET June 27, 2022 RETWEET
Several people were hurt when an Amtrak train derailed after striking a dump truck at a public crossing near Mendonâ€twitter.com/i/web/status/1â€¦mQ
cnnbrk

3:00 pm ET June 27, 2022 RETWEET
More than 1,000 people were in a shopping mall in central Ukraine that was hit by a Russian missile, President Zeleâ€twitter.com/i/web/status/1â€¦z9
cnnbrk

10:46 am ET June 27, 2022 RETWEET
The Supreme Court rules a school district violated the First Amendment rights of a football coach when he lost hisâ€twitter.com/i/web/status/1â€¦Kt
cnnbrk